One of the smartest posts I’ve read this year was written by Chris Dixon – “What the smartest people do on the weekend is what everyone else will do during the week in ten years”:

Talking to smart people that are considered experts in their fields could give you a profound insight into future trends, but how actionable is the information you receive from them?

This morning, Howard Lindzon explained how he was convinced by a bunch of smart people to sell his Netflix ($NFLX) position just before it doubled:

I have no position in Netflix. I put one in in December (on the Stocktwits stream) when the stock was in the 90′s and went to hang with some very smart people who had me convinced the Disney Deal was going to kill them. I let outside opinions influence (people I trusted that were super smart) the price and catalysts that were the reason for my investment in the first place. Now the stock has doubled. The catalyst may or may not be fully priced in, but Netflix is dominating on engagement and eyeballs.

This is a typical example of how knowing too much could hurt you – being too smart for your own good in a way. Also a reminder that if you don’t know why you are in a stock, you won’t know when to exit – meaning that you are likely to exit when you get scared, which usually is the worst possible time to do so.

From another side, I know people who have been bullish on Tesla ($TSLA) months before the electric car maker started to appear in the main-stream press and people to rave about its stock. Here is a screenshot of an email conversation I had with Dustin Schneider (who is one of StockTwits’ hackers behind the curtains) in September 2012: 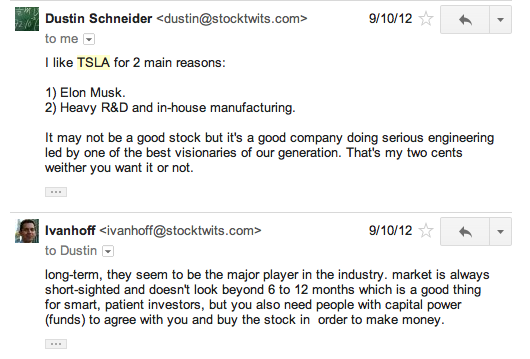 Listening to geeks (engineers, industry experts, marketing gurus, experienced angel investors and venture capitalists, insightful visionaries and futurists)  is always…smart. They see and talk about future big trends before anyone else. Blindly acting on their recommendations in the stock market….is a whole different situation. I always like to repeat to myself that it does not matter how smart you are or how incredibly genious your investment thesis is. Unless and until the market agrees with you, you won’t make a cent. The beauty of the stock market is that you don’t need to be first or original in order to make money.