Most investors are urged to index or in other words to invest in popular market benchmarks like $SPY and $QQQ, which are low-cost ways to achieve average market return. There is no arguing that over the very long-term, indexing has delivered decent returns, but very few people ask themselves why this has been the case.

There are two main reasons – rebalancing and momentum. For example, Nasdaq 100, which consists of the 100 biggest non-financial stocks listed on the Nasdaq Stock Exchange, rebalances its holdings once a year (the majority of the changes happen in December each year, but there are sporadic changes during other months too). Basically some the biggest losers of the year are replaced with some of the best performers that are not yet members of $QQQ. Over the long-term, this approach has helped to get rid off smaller-cap stocks that are in a downtrend and keep winners in their best growth years – a form of simplified, long-term trend following if you will. Of course, it is not a perfect approach, because no matter how much Apple, Microsoft or Cisco Systems drop, they will remain in the index due to their enormous size.

The curious thing is what happens in the immediate months after the rebalancing. The results might surprise you: 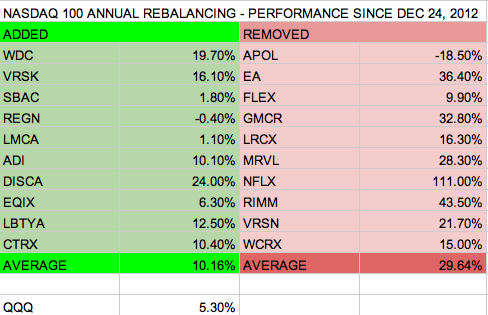 As you can see, both the new stocks and the removed stocks have substantially outperformed the index itself, as the losers have done so by a much bigger margin. This is not a one year phenomena as this study by Ryan Detrick, who is a Senior Technical Strategist at Schaeffer’s Investment Research, clearly shows: 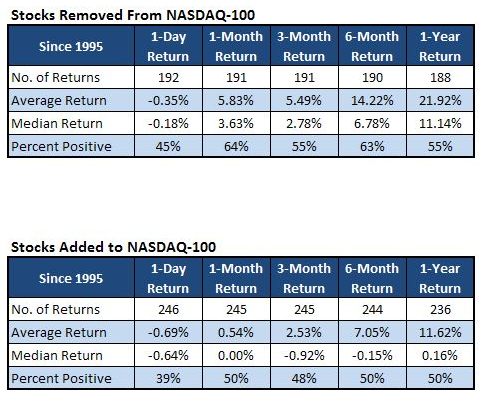