Here are six charts that defined price action and investors’ psychology in 2016.

1. The U.S. dollar added to his gains from last year. This has helped small caps to outperform. It would be interesting to see of any of the large-cap multinationals starts complaining about the Dollar’s impact on their margins.

2. Emerging markets continue to underperform. The strong dollar is the main reason.

3. The spike in interest rates has been a boon for financials. 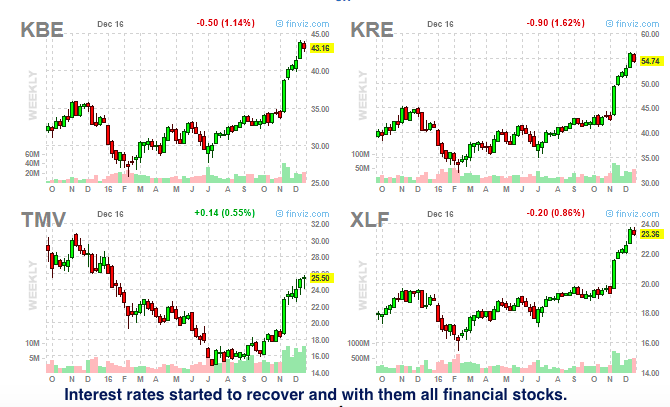 4. The biotech sector has been naughty in 2016. Most momentum stocks tend to give back 50% to 80% of their upside move after they break down. IBB is down about 33% from its all-time highs. Biotech has always been a sector of stocks with relatively low correlation among them.

5. Both, value and momentum can work.

6. The best performers after a deep market correction are usually the stocks that were hit the worst during that correction. 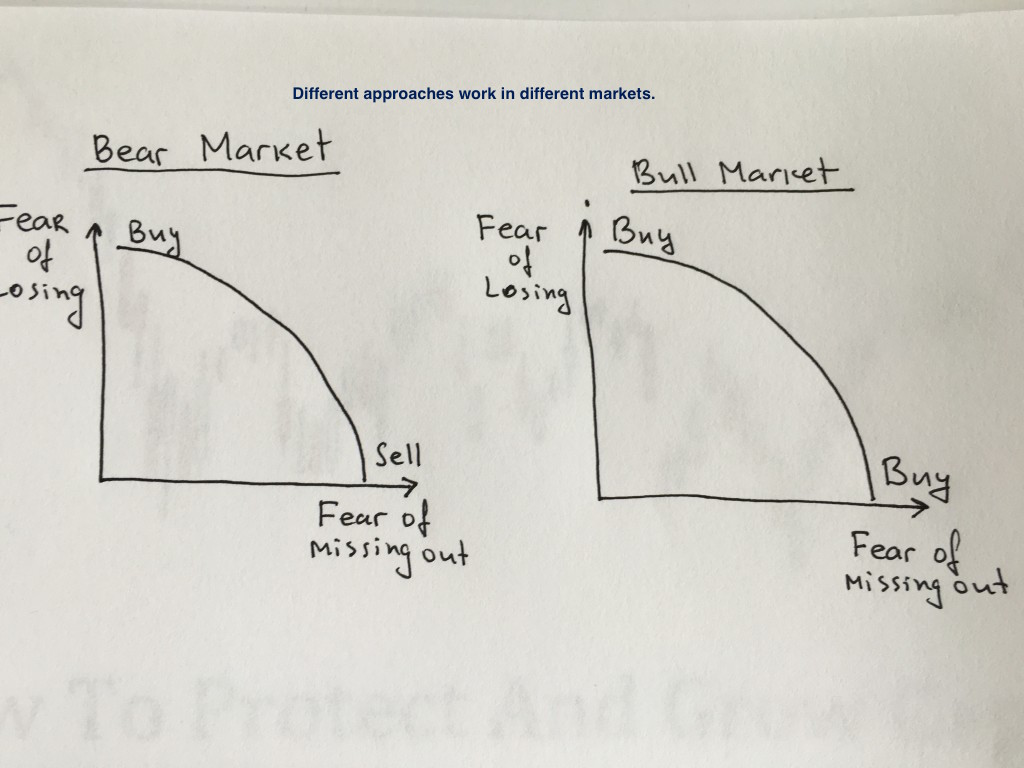 Check out my newest book: Top 10 Trading Setups – How to find them, when to trade them, how to make money with them.

We  often take an Uber when we go out at night. I always like to talk to drivers. The other day, my driver was a recent immigrant from China. As most drivers, he likes the flexibility that Uber offers, but it is a part-time job for him. He is looking to branch out in a different business.

What do you want to do, I asked him.

Him: “Real estate. This is what we did in China. In fact, I just bought four 2-bedroom units in Pacific Beach and I am renting them out for $2,500 a month each. We are considering trying out short-term renting via AirBnb to double our income”

I know it’s not easy to transfer so much money from China into the U.S., so I asked him about it.

Him: “China doesn’t let you transfer more than $50k per year per person. We sent our money first to Hong Kong and from there an Investment Bank helped us to transfer it to the U.S. for a 10% fee. We are still happy with the deal. I want my kids to grow up in a free country. China is still a communist country, where freedom of speech is not really allowed. The government controls everything.”

1. The most difficult part of managing other people’s money

2. Claugus uses Bollinger Bands (2 standard deviations) on S&P 500, the Nasdaq 100 and Russell 2000  to define his market exposure to indexes.

I am a reversion-to-the-mean thinker. We use standard deviation bands to define extreme readings.

3. Incentives matter. For many money managers, career risk trumps market risk. As the saying goes – it is better to fail conventionally than to succeed unconventionally.

During the fourth quarter of 1999, when the market was skyrocketing and I was net short, I was losing my ass at the same time most other hedge funds were making a ton of money. When your investors look around, and you’re losing money, while everyone else is making money, they are much more likely to pull their investment. Being short in a rising market is very difficult from an investor relations standpoint. In 2008, we were losing money, but so was everyone else. It’s a lot easier to keep your capital base in that type of scenario.

When the market sells off really hard, as happened in late 2008 to early 2009, it is usually a matter of liquidity. There’s no place to hide in a liquidity sell-off; people sell everything because they have to, not because they want to. The reverse rarely happens on the upside. People don’t run out and buy everything. There are always some stocks that are going down. The interesting thing is that shorts are actually easier to find than longs. It is easier to spot a broken company than a good company. It is easier to identify bad management than good management.

5. The market is forward-looking and myopic at the same time. It does not look too far into the future because the further in time, the higher the uncertainty of cash flows. Some managers take advantage of this short-term nature of the market by being proactive and looking further than the market could see. The single most important concept in his stock selection process – look for future revenue generation that can be reasonably anticipated but that is not reflected by the current market price.

I often find that the market won’t pay anything for production potential that is more than a year away.

One of Claugus’s major themes in selecting individual stocks is looking for companies that will benefit from a future development that is not being priced into the current market. The source of the improvement can take many forms including anticipated new sources of production, new technology, an expected increase in asset values, and so on. Claugus says that if a revenue source is more than a year away, the market will often fail to assign any significant value to it.

Sometimes, you will take a look at a momentum stock that is trading at a P/E of 50 and you will quickly dismiss it as richly valued. P/E reflects market expectations and a P/E of 50 is way too high. Well, if this stock continues to double revenue and triple earnings, trading at P/E of 50 could actually be cheap – a bargain. Context is really important.

Don’t forget to check out my newest book: Top 10 Trading Setups – How to find them, when to trade them, how to make money with them.