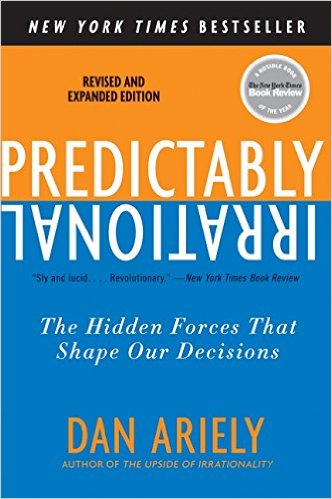 Without pretending that the quotes below capture the essence of Dan Ariely’s book Predictably Irrational, here are a few of his conclusions that I think are interesting. I added some comments next to some of them (in blue).

1.Humans rarely choose things in absolute terms. We don’t have an internal value meter that tells us how much things are worth. Rather, we focus on the relative advantage of one thing over another, and estimate value accordingly. (For instance, we don’t know how much a six-cylinder car is worth, but we can assume it’s more expensive than the four-cylinder model)

3.The New York Times ran a story recently about Gregg Rapp, a restaurant consultant, who gets paid to work out the pricing for menus. He knows, for instance, how lamb sold this year as opposed to last year; whether lamb did better paired with squash or with risotto; and whether orders decreased when the price of the main course was hiked from $39 to $41. One thing Rapp has learned is that high-priced entrées on the menu boost revenue for the restaurant—even if no one buys them. Why? Because even though people generally won’t buy the most expensive dish on the menu, they will order the second most expensive dish. Thus, by creating an expensive dish, a restaurateur can lure customers into ordering the second most expensive choice (which can be cleverly engineered to deliver a higher profit margin).

4. We are always looking at the things around us in relation to others. We can’t help it. This holds true not only for physical things—toasters, bicycles, puppies, restaurant entrées, and spouses—but for experiences such as vacations and educational options, and for ephemeral things as well: emotions, attitudes, and points of view. We always compare jobs with jobs, vacations with vacations, lovers with lovers, and wines with wines.

5. The more we have, the more we want. And the only cure is to break the cycle of relativity.

6. In order to make a man covet a thing, it is only necessary to make the thing difficult to attain.

7. Although initial prices  are “arbitrary,” once those prices are established in our minds they will shape not only present prices but also future prices  – first impressions matter; recency bias has a huge impact on our decision making. It explains why a $30 per barrel oil seemed expensive in 2002 (it was a new 10-year high at the time) and why a $30 oil seems super cheap today (it is a 10-year lows).

8. With everything you do, in fact, you should train yourself to question your repeated behaviors. We should also pay particular attention to the first decision we make in what is going to be a long stream of decisions (about clothing, food, etc.). When we face such a decision, it might seem to us that this is just one decision, without large consequences; but in fact the power of the first decision can have such a long-lasting effect that it will percolate into our future decisions for years to come. Given this effect, the first decision is crucial, and we should give it an appropriate amount of attention.

9. WHAT IS IT about FREE! that’s so enticing? Why do we have an irrational urge to jump for a FREE! item, even when it’s not what we really want? I believe the answer is this. Most transactions have an upside and a downside, but when something is FREE! we forget the downside. FREE! gives us such an emotional charge that we perceive what is being offered as immensely more valuable than it really is. Why? I think it’s because humans are intrinsically afraid of loss. The real allure of FREE! is tied to this fear. There’s no visible possibility of loss when we choose a FREE! item (it’s free). But suppose we choose the item that’s not free. Uh-oh, now there’s a risk of having made a poor decision—the possibility of a loss. And so, given the choice, we go for what is free. – not sure that free is always alluring. In fact, if you go on the street and start offering people free money or a free apple, most won’t take it, because they’ll think that something is wrong. More importantly, they won’t take it because they don’t know you and therefore, they don’t trust you yet and because your offering seems ludicrous.

10. A great way to increase sales is by offering people something for free. The small cost of something for free is usually more than justified by the increase in sales…LET ME TELL you a story that describes the real influence of FREE! on our behavior. A few years ago, Amazon.com started offering free shipping of orders over a certain amount. Someone who purchased a single book for $16.95 might pay an additional $3.95 for shipping, for instance. But if the customer bought another book, for a total of $31.90, they would get their shipping FREE! Some of the purchasers probably didn’t want the second book (and I am talking here from personal experience) but the FREE! shipping was so tempting that to get it, they were willing to pay the cost of the extra book. The people at Amazon were very happy with this offer, but they noticed that in one place—France—there was no increase in sales. Is the French consumer more rational than the rest of us? Unlikely. Rather, it turned out, the French customers were reacting to a different deal. Here’s what happened. Instead of offering FREE! shipping on orders over a certain amount, the French division priced the shipping for those orders at one franc. Just one franc—about 20 cents. This doesn’t seem very different from FREE! but it was. In fact, when Amazon changed the promotion in France to include free shipping, France joined all the other countries in a dramatic sales increase. In other words, whereas shipping for one franc—a real bargain—was virtually ignored by the French, FREE! shipping caused an enthusiastic response.