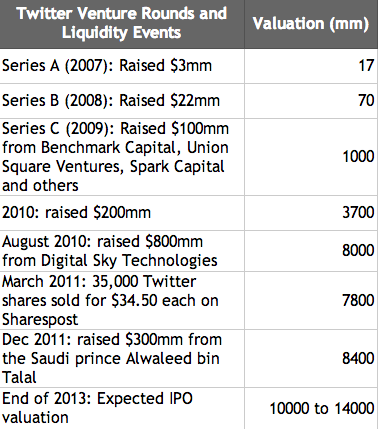 It has been a good month for the Social Web. Facebook ($FB) finally cleared new all-time highs and now even the gamblers who blindly sent buy-at-market orders on the day of its IPO are above the watermark. LinkedIn ($LNKD) raised a billion dollars in a secondary offering and its stock did not even blink. In fact, it is still trading near all-time highs. Twitter filed for an IPO, which probably explains the buzz around all other social web stocks.

We live in a fast world. Twitter has made it even faster. It started as a side company project and in a few short years, it became the most powerful media company in the world. Founded in 2006, raised its first money in the summer of 2007 – 3 million on a valuation of 17 million. In 2009, Twitter’s CEO Dick Costolo said that VCs value Twitter at 1 billion and he was laughed at. Who is laughing now? Initial projections are for a $14 Billion IPO. It is expected to reach revenues of more than half a billion dollars for 2013, but it is not profitable yet. In a counter-intuitive way, this is good news. Yelp was not profitable either when it IPO-ed. It means that it is relatively early in its growth cycle – not in terms of users acquisition, but in terms of monetizing those users.

Why is Twitter Going Public Now? At the top of my head, there are four distinct reasons:

1) The market is ready. You don’t go public when you have to, but when you can. Investment bankers are confident in the current ability of the market to absorb supply from big IPOs, especially in the social web field, which has never been so hot.
2) Twitter cannot get much higher valuation in the private market
3) VCs are pushing for an exit. The moment you take venture money, you have to start planning for an exit and for billion dollar companies, an Initial Public Offering is basically the only viable exit strategy.
4) Twitter needs money to compete for strategic acquisitions. Last year, they wanted to buy Instagram and were ready to pay 700M, but Facebook outbid them with $1 Billion.

Now, they will have the road trips, where Twitter management will try to convince a bunch of old men to invest your pension money into the new media shares. One thing is for sure, Dick Costolo won’t be wearing a hoody on those presentations. I don’t think he will have any troubles convincing the institutions.

How Will Twitter’s IPO affect you as an investor?

The rule of thumb is to stay away from any IPO that is widely publicized and massively expected. If your mom, who never cares about stocks, calls you and asks you if it is a good idea buy Twitter’s IPO, then you should definitely not buy.

The first six months to one year after an IPO are usually a period of ownership transfer – from insiders to mutual funds, hedge funds and retail investors. They are also a period of elevated volatility and trendless grinding. Historically, most big market winners, have started their ascent about a year after their IPOs. Yelp, Tesla and LinkedIn are good recent examples. There have been exclusions to the rule, but rare.