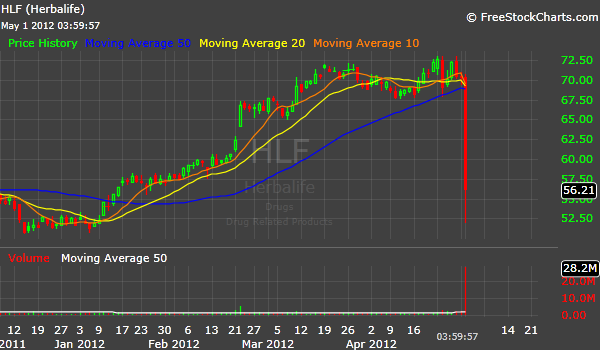 There is a saying that the market reflects the price of everything and the value of nothing. Wall Street is such a house of mirrors. There are very few original thinkers. If you have a good track record (read you were right at least once big time) and you sound and act confident, not only no one is going to question you, but also you are likely to have tremendous impact on the market.

Are there way too many “second level” thinkers in this market, who prefer to take the short cuts and let’s say look only at charts and follow established names? Everyone is taking the path of least resistance, not only because it takes less efforts, but because it has worked most of the time. Who is left to do the real homework? I am certainly guilty of charge.

I am sure that even David Einhorn was pleasantly surprised by the reaction his comments caused during Herbal Life’s conference call. Here is what one of the StockTwits’s users rightfully pointed out earlier today:

He makes a really good point. Benjamin Graham liked to say that “Price is what you pay. Value is what you get”. The reality is that value is what you think you get. Price is what the market is willing to pay for it. Value could be very subjective, even in the stock market. What is worth zero to you, is worth $1 billion to Facebook, for example.

KidDynamiteBlog: $HLF funny thing is that if I hadn’t come to the conclusion that I was wrong I would have bought even more stock and made a killing!  May. 1 at 1:07 PM

Everything looks so clear and easy in hindsight, but it is never so in real time.

The market has become so short-sighted, impulsive and reflective. Or maybe it has always been like that.

Prices change when expectations change and the latter change under the influence of outside factors. In short-term perspective, price could go anywhere and the major catalyst that impacts expectations is price action itself.

Disclosure: I traded $HLF during the day. I didn’t mention it on my StockTwits stream, because it was a short-term trade that was hard to follow.

3 thoughts on “House of Mirrors”