If you believe in the notion that relative strength is a great equity selection tool during market pullbacks, consider adding the following stocks to your watchlist: HTGM, UPLD, NUS, QDEL. 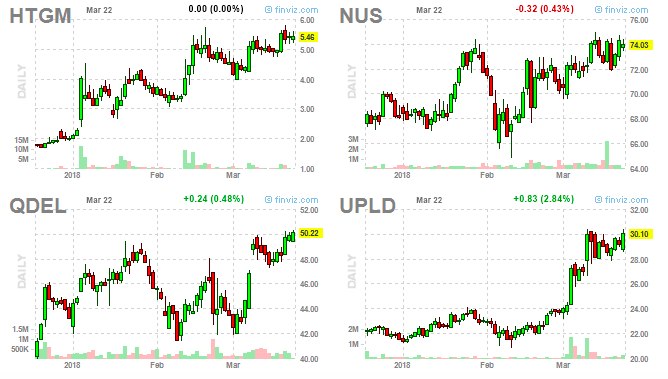 Five and a half years ago, Abnormal Returns asked a bunch of people from the financial blogosphere to share their best pick for the next decade – an asset people would feel comfortable holding. Most chose SPY. There were some calls for Nasdaq, AIG, Apple, Ford, Emerging markets. I chose Visa and/or Mastercard.

“I am not a long-term investor per se.10 years is an eternity and a lot of price cycles will change over that period of time. Nevertheless, for the purposes of this exercise, I would go with Visa ($V) or Mastercard ($MA). They have so many catalysts going for them – rising online sales, digital wallets, emerging markets and are part of the S&P 500 which will likely do well too.”

Sometimes, simple and obvious things in the market work out better than you expect.

I am still bullish on Visa and Mastercard. They continue to ride the wave of massive smartphone adoption and rapidly rising online and cashless transactions around the world. But I also pay attention to the potential threats around the corner. The blockchain technology will likely create many new competitors for Visa and Mastercard. They are not going anywhere. They will continue to grow but their margins are likely to come under pressure. I think we are at least five years away from that happening.

What is to stop Apple and Google from creating a bank? Quite a few of their users would proudly transfer their finances to the Bank of Apple and the bank of Google. More and more people will use their phone as a digital wallet and pay everywhere with it. Services like Venmo will become more popular and share less personal information. All merchants will surely love a transaction that doesn’t involve paying 3% to Visa or MA.

20 stocks have more than doubled year-to-date. 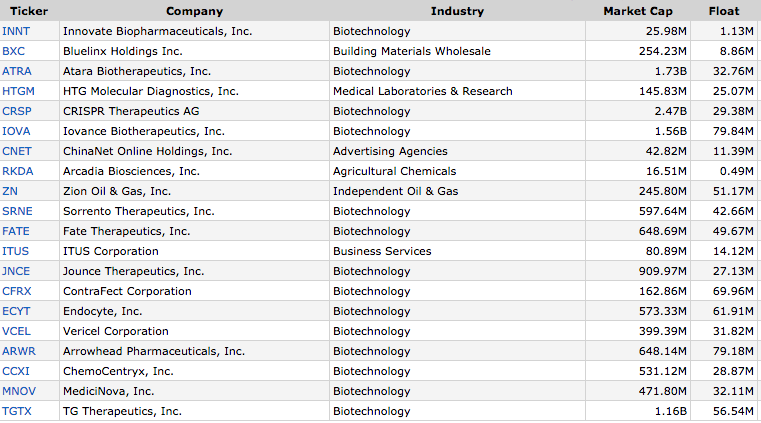 All of them had a market cap of under $1 Billion on January 1st.

Float is the difference between Outstanding Shares and Restricted Shares.

Restricted shares cannot be traded until certain conditions are met. They are usually employees compensation stocks that have not been vested yet. Founders’ stock that is locked up (the founders and private investors in new public companies are usually not allowed to sell their shares in the first 6 to 12 months after the IPO).

A small float can cause a major supply/demand disbalance and a substantial price appreciation or depreciation in a short period of time.

A small float is a double-edged sword. It can lead to fast moves but also liquidity can disappear suddenly and leave you hanging if you own a large number of shares.

Most of the best performers YTD were neglected. They did not have strong momentum going into 2018. Most were/are not profitable. None of them are fastest growing companies.

Most started their move with a huge-volume price expansion. Then, they consolidated and gave a decent secondary entry.

Keep in mind that this analysis is made on a really short time frame. Year-to-date means less than three months as of today. If you study the performing stocks for the past 3 years, you might find out entirely different reasons behind their moves.

Know your time frame and the catalysts that matter the most for it.