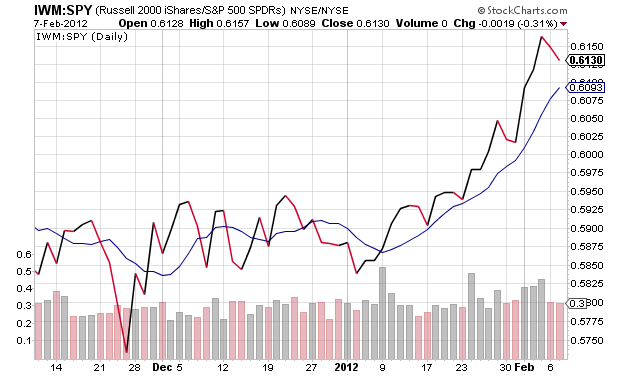 1. Small Caps ($IWM) have been severely underperforming over the past 3 weeks, essentially reflecting a new stage in the current uptrend – the so called flight to quality. This is not necessarily a bad sign, but a clear indication of decreasing risk appetite, which tends to feed on itself.

2. The major indexes ($SPY, $QQQ) had 3 distribution days in the past 13 days, which is certainly a reason for caution, but not for turning outright bearish yet.Tops in market averages are a process, not an event. Price/volume action gives enough clues before any major damage is caused.

3. There is a decent number of long setups that look like a Picasso – prior uptrend, followed by 5-20 days of tightening sideways price consolidation near major highs and yet very few of them actually break out. Those that do, are short-lived and quickly fade. Buyers don’t have the conviction to step in and push higher.

There are no reasons to turn outright bearish here. It seems that institutions are waiting for a pullback before allocating more capital. I assume that dips in high-growing names will be welcomed as buying opportunities, but in the meantime I raised cash this morning and pulled out of positions that haven’t performed according my expectations.

No matter how much experience you have in the stock market, you can always learn something new that will make you better and more profitable trader. Last Saturday, I drove to LA to attend Joe Fahmy’s Trading Big Winners seminar and I am happy to report that it was well worth it. Here are 7 things that I learned or was reminded of:

1) The names of the big winners change every few years, but their fundamental and technical characteristics stay the same. Stunning earnings and sales growth have been the common denominator of all long-term big market winners ever since the 1920s. This is still the case today.

2) Howard Lindzon also gave a short speech on his market approach. He highlighted three 3 important elements: Staying in the game; Having a Routine and understanding the catalyst behind the stock of interest. He is hunting for his winners on the all-time high list, but he is further pruning by focusing only on companies “I could be the head of marketing”. Howard also recommended to write down your market thoughts on a publicly visible platform like a blog or StockTwits as this will clarify your thought process and it will keep you accountable, mainly to yourself.

3) The market is moved by the big institutions. If a $10 billion fund wants to allocate 1% of its capital to 1 stock, we are talking $100 million – an investment that will certainly leave a trace for the experienced eye, especially if the float of the stock is relatively small; hence pay attention to stocks that are advancing on high volume.

6) Taking great risk/reward trades is of utmost importance. Risking $2 to make $2 is not going to get you far.

7) Joe is looking for certain ranges in his setups to improve the probability of being right immediately.

The latest must read missive comes from Warren Buffett, who eloquently argues that during high inflationary periods, equities as an asset class might be the best house in the worst neighborhood.

It is a public secret that $1 million dollars today is not what it used to be 30, 20 or even 10 years ago. The purchasing power of most currencies has decreased substantially over time as the supply of money by central banks and the demand for credit by the public and private sector have overshadowed the increase in productivity and GDP growth. As a result, investors who have earned 5% a year on their investment for the past 40 years, might be actually in a worse position than they were when they started. Granted, inflation measures cannot account in any way for the technology innovations and improvements in quality that are available today, but nominal vs real return is certainly a topic that needs to be well comprehended by all investors.

Even in the U.S., where the wish for a stable currency is strong, the dollar has fallen a staggering 86% in value since 1965, when I took over management of Berkshire. It takes no less than $7 today to buy what $1 did at that time. Consequently, a tax-free institution would have needed 4.3% interest annually from bond investments over that period to simply maintain its purchasing power. Its managers would have been kidding themselves if they thought of any portion of that interest as “income.”

Warren Buffett continues to publicly bash gold, pretty much calling it the most unproductive asset on planet Earth. I have a slightly different view on the subject as gold could easily be viewed as a currency due to its indisputable liquidity anywhere in the world. Since Buffett started his investment activities in Berkshire Hathaway, gold ($GLD) has increased almost 50-times. This is 13.4% annual return since the Gold Standard was abolished. Of course past results are not guarantee for future performance. In his missive, Mr. Buffett basically claims that gold is in a bubble caused by fear induced, unreasonable expectations:

What motivates most gold purchasers is their belief that the ranks of the fearful will grow. During the past decade that belief has proved correct. Beyond that, the rising price has on its own generated additional buying enthusiasm, attracting purchasers who see the rise as validating an investment thesis. As “bandwagon” investors join any party, they create their own truth — for a while….. “What the wise man does in the beginning, the fool does in the end.”

Not surprisingly, Warren prefers investments in productive assets – companies, which earnings power will trump the hidden inflation tax, companies that are leaders in their corresponding industries and require minimum new capital investment – such as Coca Cola ($KO) and $IBM.

The whole piece is well worth the read.

Source: Why Stocks Beat Gold and Bonds by Warren Buffett