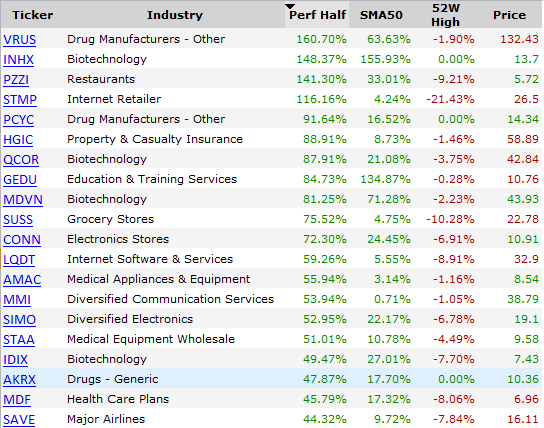 It is a habit of mine to keep track of the best performing stocks over different timeframes. While the survivorship bias could certainly distort the results, there is no better way to pinpoint the mutual characteristics of winning/losing stocks.

Over the past 6 months, $QQQ and $SPY fell 10%. Correlation is usually high during downtrends or with other words, most stocks tend to move in groups. The so called “all-or-nothing” days, where 90% of all stocks go in one direction or market averages gain or lose 7-8% in a week are typical in such environment. But below the surface, there are always stocks that manage to defeat the status quo and stand out. Below I outline some of the common characteristics of the winners over the past 6 months – traits they had as of May 29, 2011:

18 of them had market cap under $1B 6 month ago. Small caps are naturally more volatile and tend to occupy the first places of most best and worst performing lists.

11 had outperformed $SPY over the past year

4 were acquired over the past 6 months

7 are biotechs or drug manufacturers. Nothing surprising here. The price action in these type of stocks is rarely influenced by the general market

Nowadays, it is rare to encounter a really good investment book that manages to tell an inspiring story and enlighten you on the flaws of the financial industry. I just finished reading “The Big Short” by Michael Lewis and I definitively recommend it so anyone who is even remotely interested in a career in the investment world.

Here are some of my favorite passages in the book:

He concluded that there was effectively no way for an accountant assigned to audit a giant Wall Street firm to figure out whether it was making money or losing money. They were giant black boxes, whose hidden gears were in constant motion.

Regarding the value added by sell-side analysts:

On Manipulation of the masses:

How do you make poor people feel wealthy when wages are stagnant? You give them cheap loans

On Recognizing when a credit driven bubble is about to burst:

What you want to watch are the lenders, no the borrowers. The borrowers will always be willing to take a great deal for themselves. It’s up to the lenders to show restraint, and when they lose it, watch out. By 2003 he knew that the borrowers had already lost it. By early 2005 he saw that lenders had, too.

Real Risk is not Volatility:

On being contrarian and the mispricing of potential outliers:

Charley Ledley was odd in his belief that the best way to make money on Wall Street was to seek out whatever it was that Wall street believed was least likely to happen, and bet on its happening. Charlie and his partners had done this often enough, and had had enough success, to know that the markets were predisposed to underestimating the likelihood of dramatic change.

Financial options were systematically mispriced. The market often underestimated the likelihood of extreme moves in prices. The options market also tended to presuppose that the distant future would look more like the present than it usually did. Finally, the price of an option was a function of the volatility of the underlying stock or currency or commodity, and the options market tended to rely on the recent past to determine how volatile a stock or currency or commodity might be.

On how to recognize salesmen on Investment conferences:

Everyone who was trying to sell something was wearing a tie

About the rating agencies:

The ratings agency people were all like government employees. Collectively they had more power than anyone in the bond markets, but individually they were nobodies. They’re underpaid. The smartest ones leave for Wall Street firms so they can help manipulate the companies they used to work for. There should be no greater thing you can do as an analyst than to be the Moody’s analyst. It should be – I can’t go higher as an analyst – instead it is the bottom. No one give a fuck if Goldman likes General Electric paper. If Moody’s downgrades GE paper, it is a big deal. So why does the guy at Moody’s want to work at Goldman Sachs?

On being misunderstood by your investors:

The definition of an intelligent manager in the hedge fund world is someone who has the right idea, and sees his investors abandon him just before the idea pays off. When he was making them huge sums of money, he had barely heard from them; the moment he started actually to lose a little, they peppered him with their doubts and suspicions.

On the huge importance of proper functioning credit markets:

The banking system was insolvent, he assumed and that implied some grave upheaval. When banking stops, credit stops, and when credit stops, trade stops, and when trade stops – well, the city of Chicago had only eight days of chlorine on hand for its water supply. Hospitals ran out of medicine. The entire modern world was premised on the ability to buy now and pay later.

On the dramatic selloff in the fall of 2008:

There were no bids in the market for anything. There was no market. It was really only then that I realized there was a bigger issue than just our portfolio. Fundamentals didn’t matter. Stocks were going to move up or down on pure emotion and speculation of what the government would do.

The stock market is bipolar creature, driven by sentiment and irrational expectations. One day, it is an ingenious forward looking mechanism that anticipates and discounts future events beautifully. Another day, it is a stubborn schizophrenic that can’t see further than its nose. It is what it is. You either adopt or leave the scene.

Traders and European politicians have been in a Mexican Standoff for the past few weeks. While the yield on the Italian bonds was rising to record levels, U.S. equities acted like it didn’t matter. Most traders were absolutely sure that at the end of the day, the Germans’ reluctance to monetize will be broken. It is not an accident that gold rallied over the past 10-12 days. Well, traders blinked first and exits were hit.

Today, we are in no man’s land, driven by headlines and an environment where macro issues overshadow individual catalysts. I don’t want to have any market exposure overnight (long or short) and prefer to stay in cash and wait out the storm. If there is an year end rally, there will be plenty of better risk/reward opportunities ahead. There is no reason to hurry and buy dips here. If this is the beginning of a more serious correction, forced liquidations will bring prices much lower and offer better bargains. I consider both scenarios totally possible.

They say that if you understand people’s incentives, you can predict their behavior. At this point, I am not sure I understand what is driving people’ decision making. Is it the fear of underperforming or fear of losing money, Is the Return OF Capital more important that the Return ON Capital. When in doubt, stay out. While it is true that uncertainty is a second nature of the market, there are days when the market fog doesn’t let see you far enough to justify risking any money. Soon, things will get more clear. Until then, I will limit my market adventures to the occasional intraday scalp when a good opportunity presents itself.

Of course, what is good for me, might not be good for you. I manage my capital fairly aggressively, opportunity cost is a huge factor in my decision making and I change my stand quickly. Such market approach requires being very nimble and willing to stay in cash when you have to.