SMH – Semiconductors had their best year since 2009.

DX – Another strong year for the U.S. Dollar

EWZ – Brazil had its first positive year in the last 6.

Check out my newest book: Top 10 Trading Setups – How to find them, When to trade them, How to make money with them.

The year started with a big gap down in all stock indexes and a reminder that “oversold” and “diversified” mean little during forced liquidations. Crude oil dived lower and it took all stocks with it. The 3X inverse crude oil ETF DWTI went from $200 to $400 in three weeks. The small-cap biotech ETF, XBI was absolutely obliterated and lost 38%. My most-read posts in January were: 10 Musings about market corrections and 13 More Thoughts about Bear Markets.

A few months earlier (in September 2015) I wrote a book, explaining the different stages of corrections and how to approach them: Crash – How to protect and grow capital during corrections.

There was a major momentum divergence in U.S. market indexes which marked the bottom in U.S. indexes. Emerging markets had already bottomed in late January. Gold and silver miners showed notable relative strength early in the month and were massive outperformers during the market recovery. Small-cap miners like CDE went from $2 to $16 in six months.

My most-read post this month was The Two Best Performing Stock Groups after a Market Correction. It was spot on. 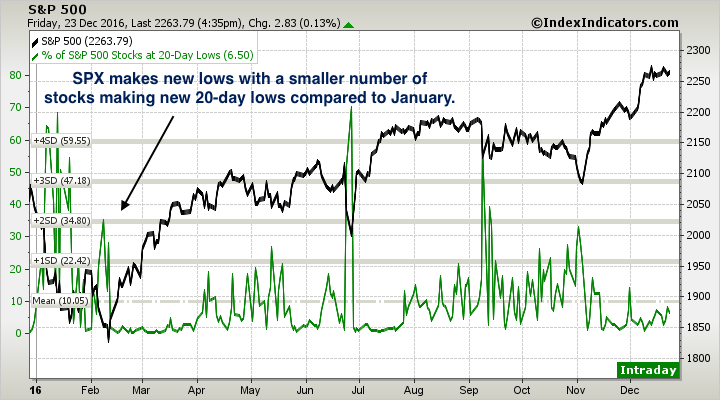 You don’t have to catch the exact bottom in order to benefit from a market recovery. You can wait a few weeks to see a confirmation of a new uptrend and still do incredible well as more and more sectors join a rally.

Emerging markets began a huge rally in early March. The 3X long Brazil ETF, BRZU went from $10 to $50 in in the following six months.

My most-read posts for the month were: What happens after a 10% market correction, What overbought breadth readings mean, and The Only Time to Savely Bottom-Fish.

My most-read posts for this month were: An example of a failed breakdown and Some of the Most Shorted Stocks are Setting Up for Potential Breakouts. 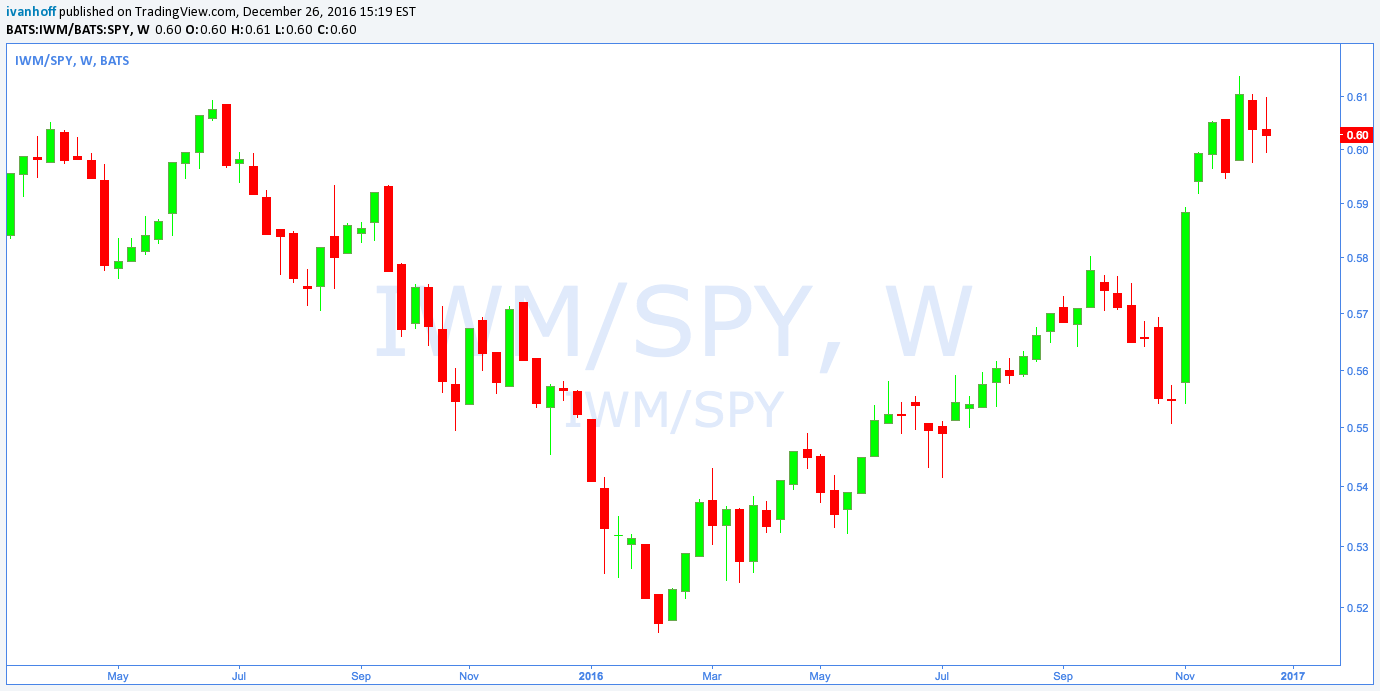 The first major pullback to a rising 50-day moving average was ferociously bought.

Brexit surprised the market. It led to a quick two-day crash, followed by just as quick and impressive snapback. The recovery in the large-cap tech ETF was especially striking. QQQ was at new year-to-date highs two weeks after the Brexit correction.

A major technical breakout in the semiconductor sector. Even if you missed the first six months of the year, July was not too late to join the market rally.

The market is in a good mood. Recent IPOs like ACIA are reaching for the sky. One of the most powerful setups is a hot recent IPO and a bull market. 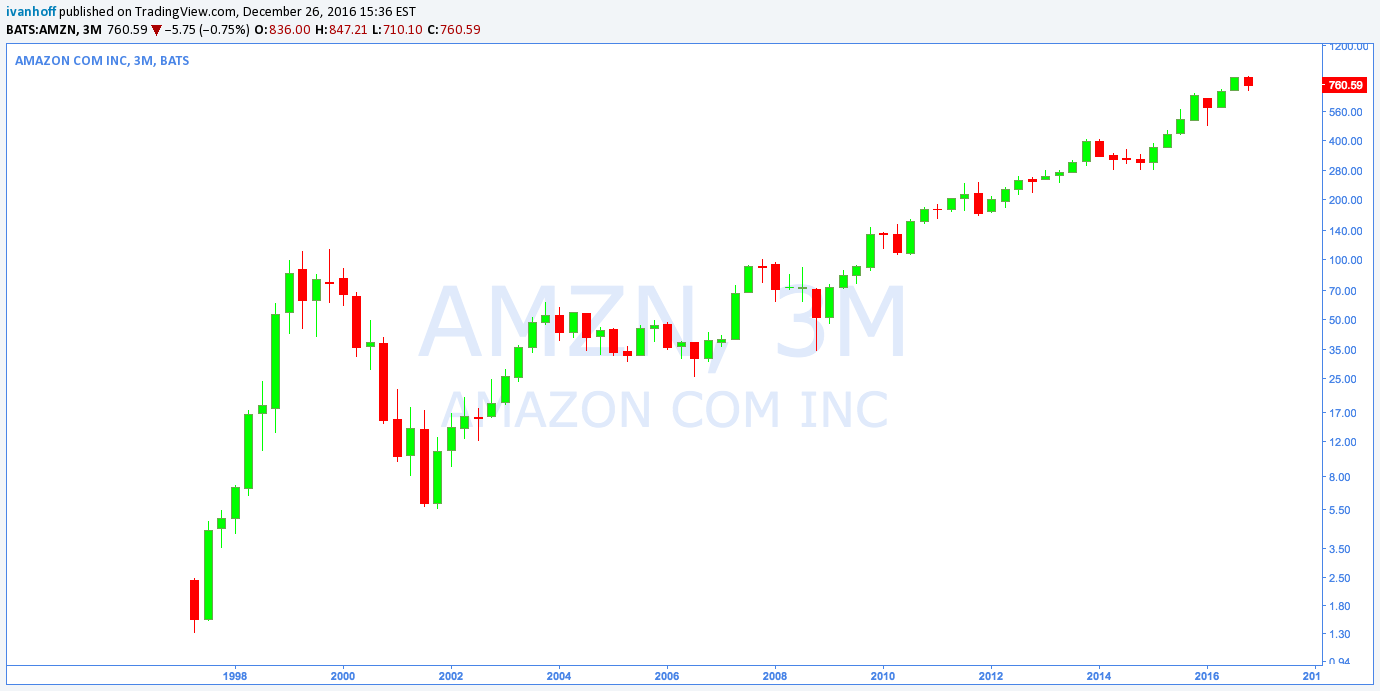 The biotech sector rolls over as the market fears the potential impact of a Clinton’s administration on drug regulations and prices.

Donald Trump wins the U.S. presidential elections. The stock market goes limit down the night of the elections. Then, it stages one of the most massive short-term rallies in its recent history. Interest rates skyrocket. Financials break out and don’t look back.

I published my newest book in November: Top 10 Trading Setups – How to find them, When to trade them, How to make money with them.

New lows in volatility. The inverse volatility ETF, XIV triples from its lows in February, 2016.

Sign up for our free weekly email at Market Wisdom. It is packed with actionable info and insightful market wisdom.

137 stocks more than doubled in 2016 (they are currently priced above $4 and trade over 100k share per day). Many of them belong to sectors that no one expected to see among the big winners in early 2016 – oil & gas and industrial metals. Only four out of the 137, had a good 2015 and can be labeled momentum stocks. All others are mean-reversions in beaten-down stocks. This distribution is unique for 2016. There was a major correction at the end of 2015 and the beginning of 2016 and then a major recovery. Most of the best-performing stocks after deep market corrections are the ones that got hit the worst during the correction. In most years, the best performers are equally distributed between momentum (stocks that had a great previous year) and mean-reversion (stocks that had a horrible previous year).

Here are the top 15 in term of performance: 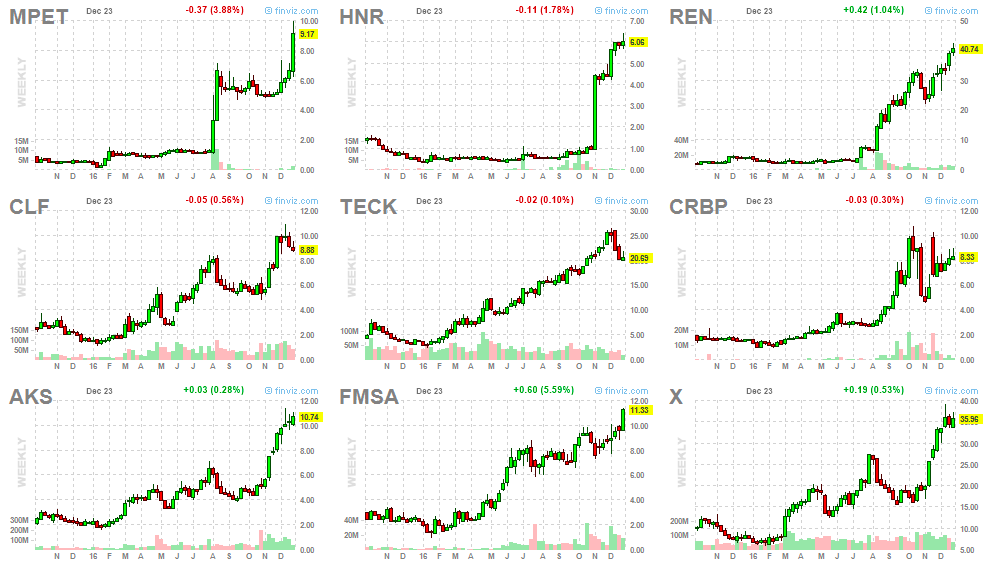 Check out my newest book: Top 10 Trading Setups – How to find them, When to trade them, How to make money with them