There are many different ways to make money in the stock market. What they have in common is that each has its own sweet spot – an environment when it works best and delivers the biggest return on capital.

I constantly innovate and try different setups. I started my career with just one setup – the so-called post-earnings announcement drift, which buys tight consolidations in stocks that gap up on earnings. It has delivered consistent profits and I continue to use it today. Over time, I gradually added more ideas to my portfolio of setups until I reached a point where I have a good setup for each type of market environment – uptrend, distribution (topping process), downtrend, accumulation (bottoming process).

Here’s an interesting setup I’ve been experimenting with. A false breakdown – it happens when a stock breaks down to new 52-week lows, but its RSI reading doesn’t confirm it. This is often referred to as a positive momentum divergence. The goal is to enter when a stock goes back above its breakdown level and to sell near a declining 20 or 50-day moving average. In a strong bull market and near major market bottoms, such type of setups could deliver quick 20-30% in 1-2 weeks. My stop is usually the low of the breakdown day.

Keep in mind that not every positive momentum divergence leads to a reversal or profit. In some cases, stocks might continue lower for several days before they reverse. This setup doesn’t work during market downtrends. 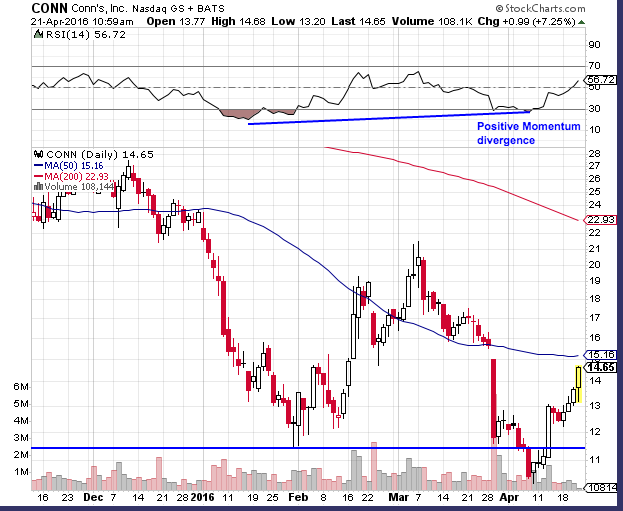 Typically such setups work best near major market bottoms. Stocks tend to top individually, but most of them bottom as a group. I talked about this development here. 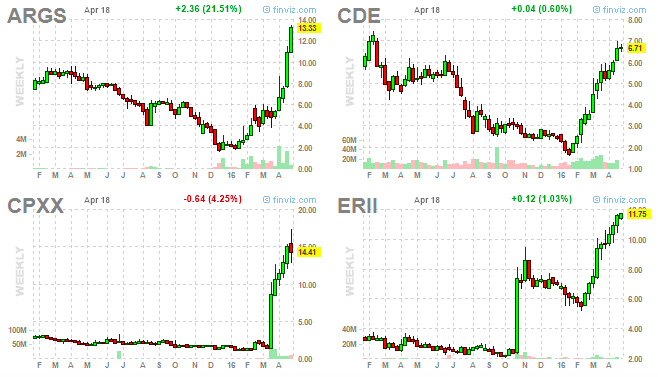 There are many different ways to make money in the stock market. What they all have in common is that none of them work all the time. Each has its “sweet spot” period when they work flawlessly and deliver incredible results.

I decided to take a look at the best performing stocks from their 52-week lows. My screens returned six stocks that have more than quadrupled from their lows.

One silver miner, one gold miner. SA reached its 52-week low in mid-2015, it made a higher low during the market correction in January this year, showing relative strength.

In any given year, some of the best performing stocks are usually the ones that surprise the most. This is why they often come from industries no one expects. Gold and silver miners were among the worst performers between 2011 and 2015. Most of them were down more than 90% from their all-time highs. They had so many fake attempts for a recovery during those years that by 2016, many people didn’t even want to think about them, not to mention buy them. When a heavily neglected industry meets newly discovered catalyst, we could see some major moves.

CDE reached its 52-week lows with the rest of the market. Most stocks tend to top individually and bottom as a group. This is the case because correlations are relatively low during rising markets and very high during corrective markets.

Two biotechs – ARGS and CPXX.  Biotechs are always on the best and worst performers lists. Their products are either huge hits and revenue generators or zeroes. While it is not wise to gamble with FDA approvals, many biotech stocks provide multiple entries and setups after their drugs have been approved.

Look at CPXX for example. In March, it gapped 350% on 30 times its average daily volume. Then, it proceeded to go up another 100% in the following month, providing multiple entries for intraday and swing traders.

ARGS has a quick 4-day momentum run from $5 to 8.50 in late March. Then, just like many momentum stocks, it pulled back to its rising 10-day EMA (exponential moving average) and set up again. We highlighted it near 6.60 in our daily swing trade reviews on MarketWisdom.com here and here. It has more than doubled since then. 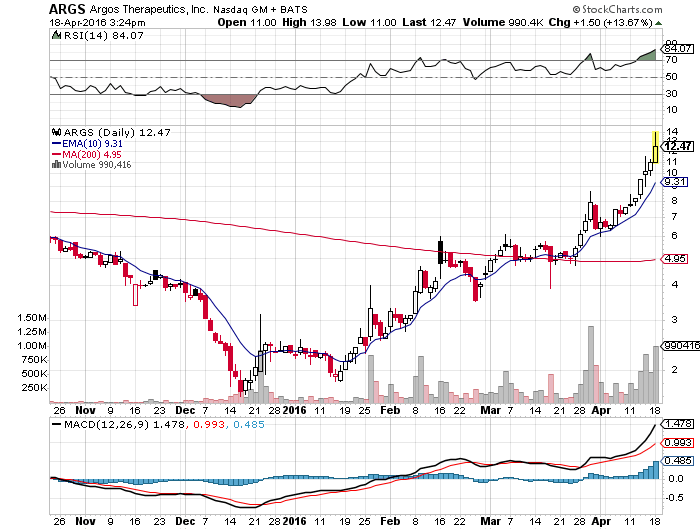 Two special situations – a pollution and treatment control services ERII and a weight loss program in the case of WTW.

In the case of WTW, Oprah announced a stake and strategic partnership. WTW gapped up 70% on the news. Then it went from 12 to 28 in the following month, again providing several good entry points after the big-volume gap.

Here’s a list of 12 stocks priced above $10 and trading over 200k shares per day. All of them are heavily shorted – more than 20% of their float is short at this point of time.

Stocks with high short interest are likely to significantly outperform in the initial stages of a market recovery. High short interest could be a powerful short-term catalyst. When prices in a heavily shorted name start rising, short-sellers have a few options:

1) Cover for a small loss. In this case, they become buyers.

2) Sit, do nothing and pray that they are not squeezed out of their position.

3) They are forced to cover their shorts as they become reluctant buyers due to margin calls.

5) Add to their short position or average up – this could be very dangerous and lead to a major short squeeze down the road.

The most powerful short-squeezes tend to happen at the beginning and at the end of a major market uptrend because short-sellers don’t believe that a short-squeeze could happen at those levels. At a beginning of a new major trend, they are too complacent due to a recent period of making a lot of money on the short side or watching other people make money on the short side. They under-react to new developments in supply/demand dynamics, which is a great recipe for a short-squeeze. At the end of a major uptrend, many of the most heavily shorted stocks have gone up a lot and most short sellers don’t think that they could go any higher. In financial markets, the obvious rarely happens, the unexpected constantly occurs.

High short interest doesn’t guarantee that a stock will squeeze higher. It is just potential energy. When combined with momentum, it could lead to higher prices.