In the examples below, I am using S&P500 data as a proxy for the market.

First a short-term perspective: About 37 % of the SPX stocks are still trading above their 20-day moving averages. This doesn’t provide an edge for either bulls or bears. Extreme readings have led to mean-reversion in the indexes during the predominantly range-bound market environment of 2015. Oversold readings (reaching a value under 20%) hasn’t always led to an immediate bounce in the averages. For a more sustainable bounce, look for a divergence – bigger percentage of SPX stocks trading above their 20dma while the SPX keeps making new lows. 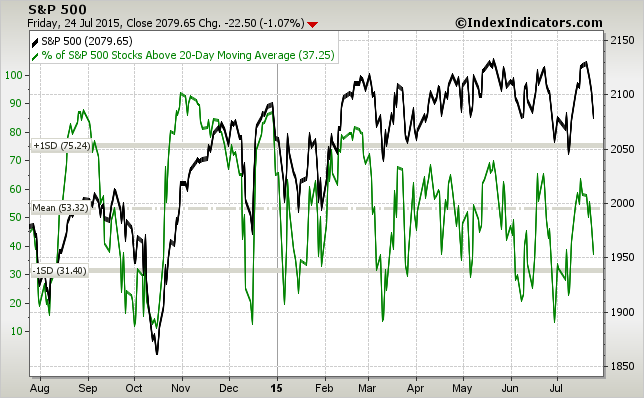 Things are looking a lot different from a long-term perspective:

The % of SPX stocks trading above their 200dmas is almost back to its levels from October 2014, when  we had an almost 10% market pullback. 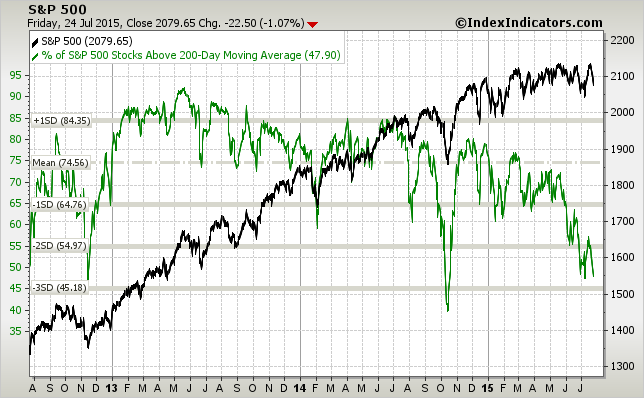 The % of stocks, making new 52-week lows is at multi-year highs. The deterioration in any industry even remotely related to commodities has been breath-stopping. 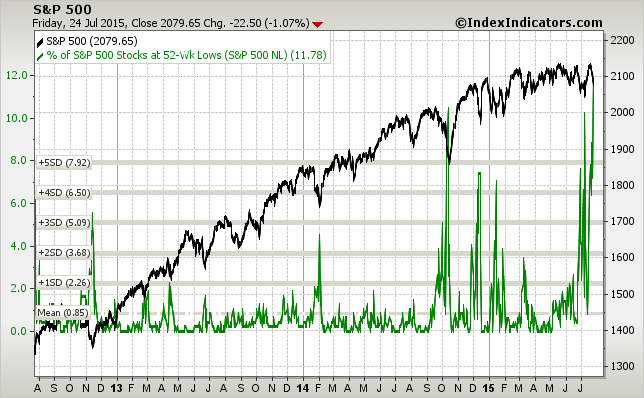 The number of stocks making new 52-week highs has been gradually declining in 2015 and it has now established in a low-value tight range. SPX has managed to keep near multi-year highs thanks to healthcare, financials, tech and consumer discretionary stocks. 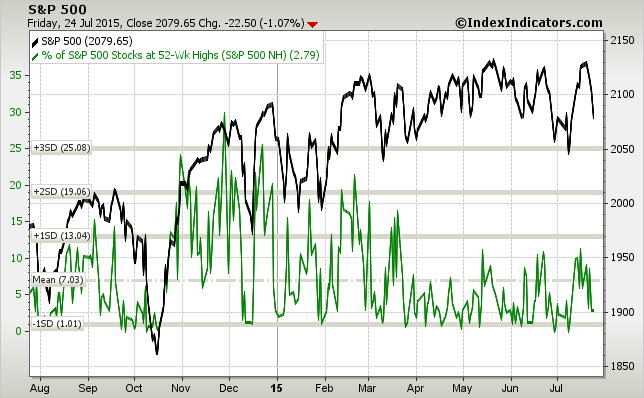 When volatility picks up, we should become less active and move slower. Hedge fund manager Frank Teixeira has good anecdote on the subject (ht midnight trader)

Most people think that Titanic sank because it hit an iceberg, when the real reason was because it was traveling too fast. The Titanic was traveling at a high rate of speed when it crashed into that iceberg. The ship was plotting a course through freezing waters. It was dark. Yet it didn’t alter its speed. Not exactly a great strategy– and certainly not smart risk management…

Many trading issues come for two reasons – over-trading and under-trading. Over-trading comes when we chase sloppy setups in unfavorable market environment. Since losses are more frequent and winners are smaller, it is easy to justify that trading more and bigger should compensate. The end result is usually a big drawdown. And what happens after a big drawdown? People are so scared to trade that they miss perfectly great trading opportunities when they start to arise. Equity selection, pattern recognition and risk management are essential stepping stones of consistently profitable trading, but they are not enough. Knowing when to be super aggressive and when to stay down is half the battle.

These are some of my tweets that received the most engagement in June. I filtered them for time sensitivity; hence there are mostly links and market wisdoms and no trade ideas:

6 investing principles that made @sacca billions: http://t.co/OnPHvW2zYi N7 is probably adding to winners.

About Booms, Bubbles and Busts – http://t.co/U8XIlqjPCG

I believe in diversification. If 4 great setups show up, I rather take them all with smaller size than to concentrate on only 1 of them

Only 68 of the original S & P 500 companies are still in $SPX. Think long and hard about that. Indexing is stock picking in disguise

Random fact – over the next 2 years, $AAPL is scheduled to pay about $23Bn in dividends or about One $TWTR.

Or as Warren Buffett likes to say: pic.twitter.com/U8vpKaiZvN

"Knowledge is knowing a tomato is a fruit. Wisdom is knowing not to put it in a fruit salad." < Noise vs Signal

$MBLY is trying to break out. 14% of its float is short. pic.twitter.com/hvBvMGyNPC

I talk about industry momentum, swing trading and more in the latest episode of @ChatWithTraders podcast http://t.co/4wwMwsg80b

My Take On Risk – http://t.co/OmpeU3nlYf

Yra Harris on Patience (quote from Inside The House of Money) $STUDY pic.twitter.com/K7YBzdXk5j

Dwight Anderson On When To Increase Your Position $STUDY pic.twitter.com/e2ij95bH0m