You don’t have to wait for the end of each year, to engage in self-reflection and figure out what worked and what didn’t. Becoming a better trader is a process and I constantly look at what I did right and what I did wrong. Last week, Joe Fahmy had a great post about the importance of staying flexible and willing to adopt to the ever changing market conditions. This week, I am diving into my own observations and sharing some of the lessons I hopefully re-learned in 2013:

1) When early in the year, I wrote that solar stocks will be to 2013 what housing-related stocks were to 2012 – the best performers coming from a place no one expects, I was ridiculed or ignored. I did not believe enough in my arguments, so I was an early seller and I traded the solar names, rather than holding them for a longer period of time. The lesson – the best performing stocks in any given year often come from industries that no one expects. Be open-minded. When you see widely disliked stocks breaking out to new 52-week highs from perfect technical bases, buy some. When you buy and people make fun of you, make sure to buy some more. When someone you consider very smart (that’s you Howie), tells you that you are crazy for buying them, go and buy some more. Having people disagreeing with your investment thesis while your stocks are making new 52-week highs is the most beautiful thing that could happen to you. Every trend needs skeptics and doubters; otherwise there won’t be anyone left to buy.

2) All stocks are price cyclical. Everyone loves Apple now, but it was killed in Q1. I sold some premium in $AAPL a few times early in the year, with mixed success and a net loss as a result. Even thinking about this type of a trade was a mistake. There were so many stocks breaking out to new all-time highs and offering a lot more hassle-free way to make a lot more money. The lesson – stocks that continuously make new 50-day lows in bull markets are usually there for a good reason. Stay away from them. A downtrend is a downtrend. Don’t try to play cute and try to bottom fish great brands in bull markets. There are a lot better opportunities out there. Stick to what you know and do best. You don’t need to be a “jack of all trades”.

3) When you see an industry gaining momentum, buy the clear price leaders, not the next best thing. It is not a secret to anyone that China has been the hot industry to be in September/October (not any more after the $NQ fiasco last week). I noticed Chinese Internet stocks gaining momentum in July – $QIHU, $BIDU, $SINA, $SFUN were breaking out to new 50-day and 52-week highs on major volume. Instead of focusing all my attention and capital to the clear price breakouts, I decided to look for the next Chinese Internet name to break out. I found $SOHU, loved its technical setup and bought in expectation for a breakout. They reported earnings that the market did not like, the stock pulled back to its rising 100dma and I was stopped. Its long-term trend was untouched and later in summer $SOHU had a major move higher, but in the mean-time my opportunity cost was ginormous – stocks like $QIHU and $SFUN doubled in a few short months.

4) Market leaders often have deep corrections along they. Don’t be afraid to buy them back when they setup up again. In many cases, they will. Solar and TV broadcasting stocks had a 40% pullbacks in August, but many managed to set up again in September and return to new all-time highs, providing incredible opportunities. I caught some of the move in $SCTY and $FSLR, but missed on the recovery in media stocks. Currently, the housing-related stocks might me going through similar recovery. Keep an eye on them – furniture stocks, regional banks, REITs, etc.

5) A trend could continue a lot longer than even the biggest optimists expect. Look at the ascent in $TSLA, $YY and $VIPS. I’ve traded them multiple times, but I would have made a lot more money if I just bought the first signals and just rode the trends. As Howard Lindzon likes to repeat – the biggest mistakes in bull markets come from selling too soon and being too active.

6) Pay attention to relative strength on big red days in the market and don’t be a sissy about taking a bigger position in stocks that exhibit it. It is not so important to be right, but how much money you make when you are right. When the market was “falling apart” in mid-August, two stocks stood out by breaking out to new 52wk highs – $TASR and $RRGB. They were perfect technical breakouts, but I only bought 1/3 of my usual position size because of the market conditions and missed on capitalizing on a big move. I should have added to my positions as those two stocks continued to rise despite the overall “struggle” in the general market.

7) A big earnings surprise is a big earnings surprise. Don’t be biased. When $FB gapped 30% on earnings in July, I was very skeptical about a potential continuation. FB has very large float and in my eyes, large float = slow mover. I could not have been more wrong in this case. $FB went up another 60% after the gap. Shortly after the gap, someone on StockTwits asked me what do I think about FB. I replied that it had all the characteristics of a major earnings surprise setup, so I am bullish, but I have no position. This should have been the big green light for me. If I was skeptical about $FB, when it was making new 52-week highs on a ginormous earnings surprise, the odds were that many other people felt the same. (see lesson N1). New 52-week highs + many skeptics = opportunity. It does not hurt you what you don’t know, but what you think you know that is not so.

Anyway, 208 stocks reached new all-time highs on Friday. 82 of them gained at least 1% on that day. There were 6 restaurant stocks: $DNKN $THI $TXRH $BWLD $CAKE and $CBRL and 3 grocery stores. 13 regional banks and Savings & Loans stocks. Also, a few asset managers, insurance brokers, REITs and a credit card company. This is a pretty bullish bet on consumer spending and low inflation (low input costs). Also, the housing-recovery related stocks are having a come-back.

Here are the 5 new all-time high breakouts that made me the biggest impression from technical perspective: 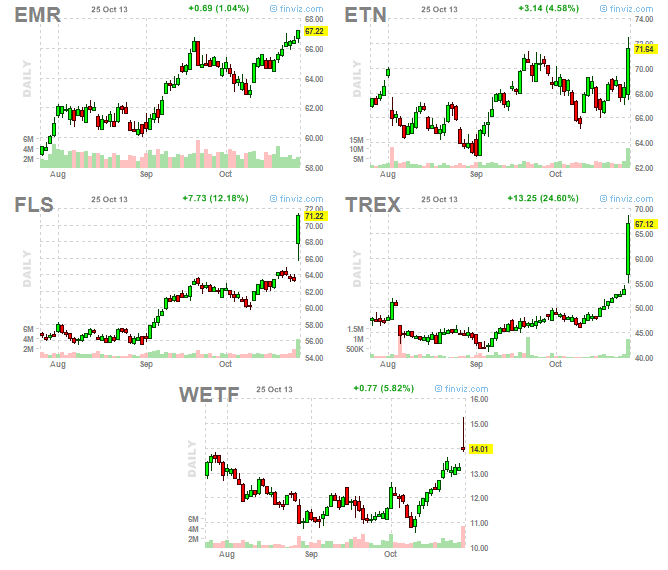 241 new all-time highs today. The housing recovery theme is back with full force. I am seeing an increasing number of regional banks, REITS and home-improvement stores on the list. Also, Biotech and healthcare svs names.

Here are the 5 new all-time highs that made me the biggest impression from technical perspective: $ULTI, $TCBI, $CAKE, $MLI, $IACI 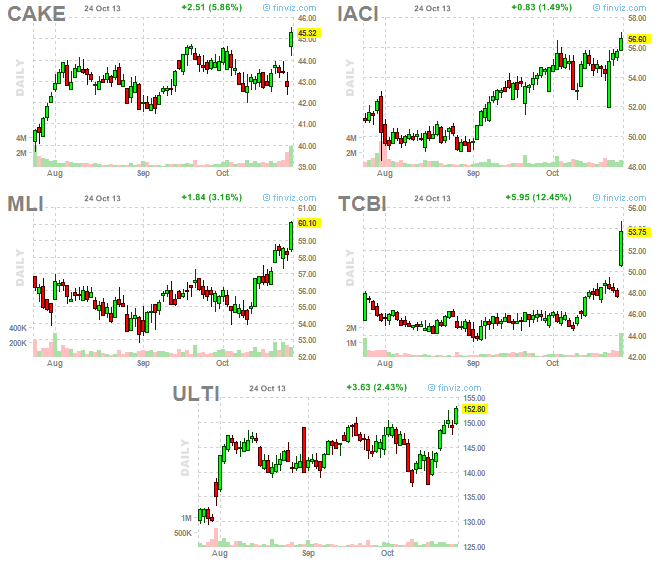