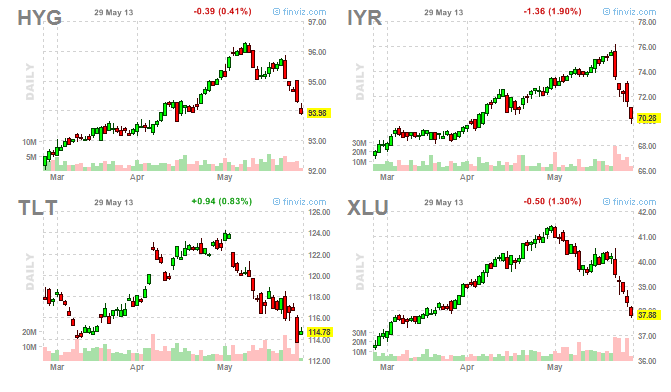 The most interest rate sensitive assets continue to be under pressure and deteriorate in an accelerated fashion, to a point that it won’t be a surprise if we see some snap-back mean-reversion later this week. The premise is that a potential QE tapering will lead to an increase in yields across the board. Notice that the FED might be months away from changing its policy, but it does not matter to the market. Financial markets live in the future and are forward looking by nature. They constantly discount events that have not happened yet. As a consequence, they will sometimes discount events that will never happen. When the expected events don’t occur, markets self-correct.

The element of speculation is an inherent part of the market and it is a major moving force. You better accept it and find a way to deal with it. Prices changes when expectations change and expectations could and often change much before fundamentals change. This is why price is considered a leading indicator – sometimes ends up being right, sometimes ends up being wrong, but it is leading nonetheless.

They say a picture is worth a 1000 words and since I don’t have time to write 5005 words, here are five pictures of stocks consolidating near 52-week highs and having the wind at their back. 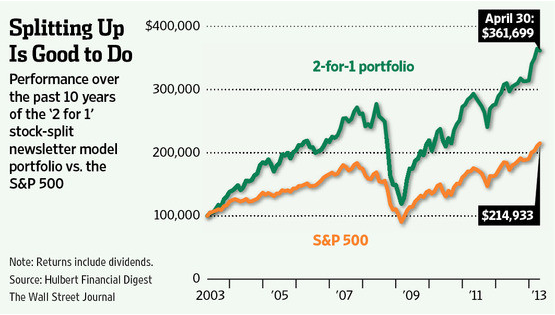 In theory, a stock split should not have any impact on stock market performance, let alone generate any alpha.  It turns out that in practice, it does. At least, it did over the past ten years according to Mark Hulbert and WSJ.

A company with 30 million shares outstanding earning $2 per share, will have 60 million shares earning $1 per share after a 2 for 1 split. The total earnings remain the same after the split. There should be no positive reaction by the stock market. The truth is that in short-term perspective, mood and psychology could trump math. And short-term could sometimes mean years.

The reality is that stock splits are often a side effect of momentum. Companies often decide to split their shares after they had a spectacular run. The ensuing outperformance is not a consequence of the split but a mere continuation of an ongoing earnings, sales and price momentum.

One more argument that Relative Strength is among the most consistent and reliable equity selection criteria. Relative strength is not flawless. Historically, it has worked best when measured on a 3 to 18-month basis. Beyond 3 years, it often leads to mean-reversion. With other words. The best performing stocks of the past six months, are very likely to continue to outperform in the next 6 months. But, the best performers of the past 3-5 years, are very likely to underperform in the next 3-5 years.