It is not a secret that 3D printing has been one of the most discussed industries in the past 6 months and one of the best performers in the past 12 months. There are currently four relatively liquid, publicly traded stocks that represent it: 3D Systems ($DDD), Stratasys ($SSYS), Proto Labs ($PRLB), The ExOne Company ($XONE) and it seems that they are all setting up for higher prices. 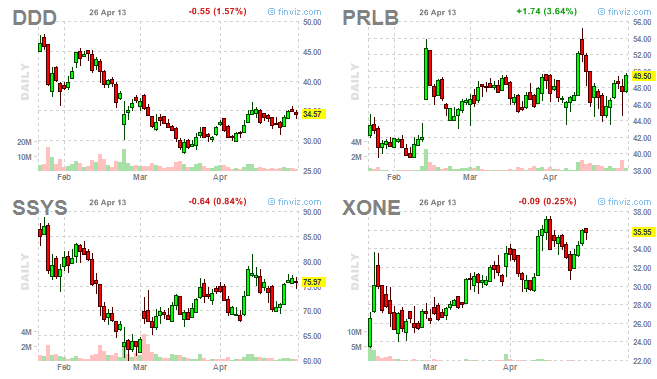 The two big ones $DDD and $SSYS took quite a beating after $XONE had its IPO on February 8th.

There are two ways to look at an IPO in a hot industry:

1) It is positive. It shows that investment banks are confident in market’s ability to absorb the new supply. Stocks from the same industry that are already public often appreciate in anticipation of the new IPO.

2) Too much additional supply of shares is just like overbuilding capacity – it is not a positive in long-term perspective as it puts pressure on prices.

$XONE is a tiny company with current market cap of $500M. It is unlikely to be the major catalyst for the selloff in $DDD and $SSYS. The total market cap of the all publicly traded 3D printing industry is still relatively small for a small surge in supply to matter.

The main reason behind the pullbacks was probably earnings related and not living up to market’s expectations. Mr. Market constantly discounts evens that have not happened yet. As a result, it will often discount events that will not happen. This is not to say that it will remain blind-sighted forever. A good story is not a long-term catalyst. The market gave the benefit of the doubt to $DDD and $SSYS for quite some time and it bid their prices substantially during most of 2012, but it expected those two to start to deliver in terms of real, organic earnings and sales growth. It did not happen, so some dissapointed market participants just took profits and sold, which put downside pressure on the industry.

There was also a sentiment aspect to the pullback. All of a sudden, in January every local TV and radio were covering 3D-printing and talking about its ginormous potential. Wall Street loves to sell to front page headlines after a substantial move.

In March, both $DDD and $SSYS bounced near their rising 200dmas, where long-term buyers typically step up to support their holdings. Since, then they have been under quiete accumulation. Granted, they still have a lot of work to do in the process of building the right side of their new basis, but the whole sector seems to be setting up again.

From technical perspective, both $DDD and $SSYS had at least a couple of tight consecutive closes and have recently broken their downtrends to the upside. They have been making higher highs and higher lows.

$PRLB has been consolidating after its monstrous earnings gap in February and above $50, it could fly again. It has a small float of only 19M shares, which is a prerequisite for volatile moves.

It is earnings season, so don’t forget to check their earnings dates. 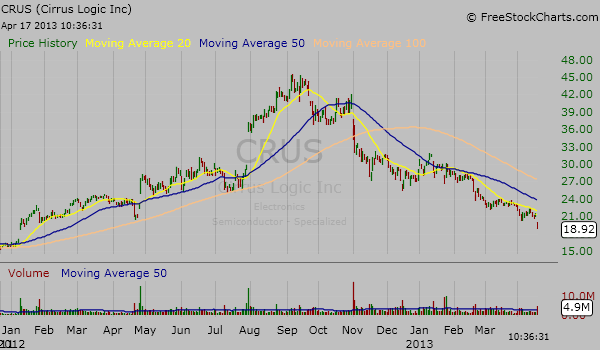 After underperforming for the most part of the past 6 months, Cirrus Logic ($CRUS), which is one of Apple’s suppliers, gapped down again this morning after giving a disappointing guidance. In a about a year, $CRUS went from $19 to $45 back to $19. This is a typical momentum story in a condensed period of time. What are some of the lessons its story reminded of:

1) Once a stock breaks out to new 52-week high from a proper base and on fresh earnings-related catalyst, you don’t know how far the re-pricing could get and for how long the new trend could continue. One of Stanley Druckenmiller’s famous quotes in ‘The New Market Wizards’ book goes something like this:

I never use valuation to time the market. I use liquidity considerations and technical analysis for timing. Valuation only tells me how far the market can go once a catalyst enters the picture to change the market direction.

I wholeheartedly agree with the first part, not so much with the second. I don’t think anyone knows in advance how far a stock could go after it breaks out and any projections are just guesses.

2) Price trends often start and end before earnings trends. When $CRUS destroyed the earnings estimates in November of last year, many people were shocked to see the market reaction – a gap down from $41 to $37. At the time, it was perceived as a buying opportunity by many, citing the spectacular earnings growth. It has been all downhill ever since. The lower the stock went, the more attractive it looked to many, only to be disappointed as surprises often follow the direction of the established trend, until in the end – knowing when that elusive end could be is extremely useful. Poor reaction to what is perceived to be a good earnings report is usually one of the first signs that the price trend is over and since the price is the only thing that pays us, it is the main trend we should pay attention to.

3) Stay away from stocks with low relative strength, especially if they have been recent momentum leaders. In the majority of cases, you will be served better if you stay away from stocks making new 3-month lows (even worse – new 52-week lows) during bull markets. Most of stocks are there for a reason. No matter how appealing the seem from whatever perspective you chose to look at them, you will do yourself a favor not to touch them and go fish somewhere else.

Since Gold and Silver are crashing and are on everyone’s mind, here’s an extract from last year’s Berkshire Hathaway’s annual letter to shareholders, where Buffett eloquently reveals how he thinks about the shiny metal:

The second major category of investments involves assets that will never produce anything, but that are purchased in the buyer’s hope that someone else – who also knows that the assets will be forever unproductive – will pay more for them in the future. Tulips, of all things, briefly became a favorite of such buyers in the 17th century.

This type of investment requires an expanding pool of buyers, who, in turn, are enticed because they believe the buying pool will expand still further. Owners are not inspired by what the asset itself can produce – it will remain lifeless forever – but rather by the belief that others will desire it even more avidly in the future.

The major asset in this category is gold, currently a huge favorite of investors who fear almost all other assets, especially paper money (of whose value, as noted, they are right to be fearful). Gold, however, has two significant shortcomings, being neither of much use nor procreative. True, gold has some industrial and decorative utility, but the demand for these purposes is both limited and incapable of soaking up new production. Meanwhile, if you own one ounce of gold for an eternity, you will still own one ounce at its end.

What motivates most gold purchasers is their belief that the ranks of the fearful will grow. During the past decade that belief has proved correct. Beyond that, the rising price has on its own generated additional buying enthusiasm, attracting purchasers who see the rise as validating an investment thesis. As “bandwagon” investors join any party, they create their own truth – for a while.

Over the past 15 years, both Internet stocks and houses have demonstrated the extraordinary excesses that can be created by combining an initially sensible thesis with well-publicized rising prices. In these bubbles, an army of originally skeptical investors succumbed to the “proof” delivered by the market, and the pool of buyers – for a time – expanded sufficiently to keep the bandwagon rolling. But bubbles blown large enough inevitably pop. And then the old proverb is confirmed once again: “What the wise man does in the beginning, the fool does in the end.”

Today the world’s gold stock is about 170,000 metric tons. If all of this gold were melded together, it would form a cube of about 68 feet per side. (Picture it fitting comfortably within a baseball infield.) At $1,750 per ounce – gold’s price as I write this – its value would be $9.6 trillion. Call this cube pile A.

Let’s now create a pile B costing an equal amount. For that, we could buy all U.S. cropland (400 million acres with output of about $200 billion annually), plus 16 Exxon Mobils (the world’s most profitable company, one earning more than $40 billion annually). After these purchases, we would have about $1 trillion left over for walking-around money (no sense feeling strapped after this buying
binge). Can you imagine an investor with $9.6 trillion selecting pile A over pile B?

Beyond the staggering valuation given the existing stock of gold, current prices make today’s annual production of gold command about $160 billion. Buyers – whether jewelry and industrial users, frightened individuals, or speculators – must continually absorb this additional supply to merely maintain an equilibrium at present prices.

A century from now the 400 million acres of farmland will have produced staggering amounts of corn, wheat, cotton, and other crops – and will continue to produce that valuable bounty, whatever the currency may be. Exxon Mobil will probably have delivered trillions of dollars in dividends to its owners and will also hold assets worth many more trillions (and, remember, you get 16 Exxons). The
170,000 tons of gold will be unchanged in size and still incapable of producing anything. You can fondle the cube, but it will not respond.

Admittedly, when people a century from now are fearful, it’s likely many will still rush to gold. I’m confident, however, that the $9.6 trillion current valuation of pile A will compound over the century at a rate far inferior to that achieved by pile B.