Today, Under Armour is a $5 billion dollar company that is primarily popular in the United States. Nike has a $50 billion market cap and it is a brand that it is well recognized worldwide. This is reflected in both companies’ geographic revenues:

Currently 95% of $UA net revenue comes from North America. Less than 10% of the world population accounts for the big majority of their sales.

Nike is a much better recognized global brand and as a result 2/3 of its net revenue in international, which also means that currency changes have big impact on its bottom line:

The room for international growth is still huge for both brands, but apparently much more so for Under Armour. Potential is not always realized and the competition in sports apparel and shoes is as big as it gets. It will take years and solid marketing efforts for Under Armour to reach Nike’s popularity. Nothing should be taken for granted.

$UA has a float of under 40 million shares and it has recently announced a 2 for 1 split (the first in its history). 13% of its float has been sold short. Its stock has already quadrupled since the IPO in the end of 2005. It is growing faster than Nike and naturally has higher P/E. 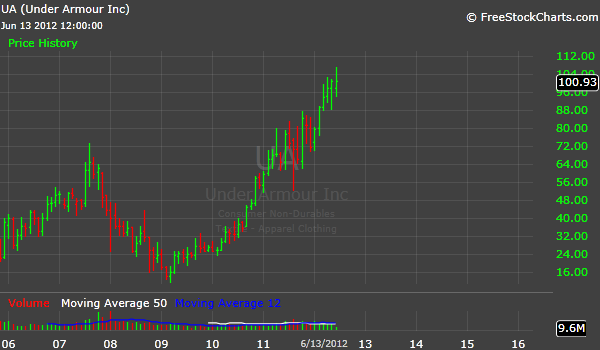 $NKE on the other hand has a 10-times bigger float – 400 million shares. Only 1% of its float has been short. Apparently the market believes that it is fairly valued. $NKE has been publicly traded for almost 32 years, during which it had a 2 for 1 stock splits four times. It has returned 14,700% to its first shareholders. It is a cash machine that pays 1.4% dividend. 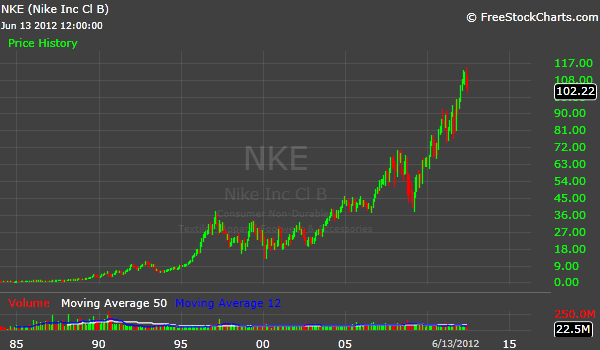