There is a saying that only price pays, but sometimes price is not a the ultimate leading indicator. In financial markets, everyone tries to be one step ahead of the competition and is constantly looking for an edge. Often, the only edge you need is to understand your own and your fellow investors biases and incentives.

There are varisous ways to gauge the health of the market and get prepared for its next move:

– breadth (number of stocks on the 52week high list, percentage of stocks above their 200dma…);

– leading sectors (tech and financials and consumer discretionary have led this rally. Probably they will be the ones to go first too, when the market benchmarks turn south);

– asset classes correlations (is money flowing to the perceived safety of treasury bills and notes or to equities and high-yield bonds);

These are all valid and potentially useful approaches, but there is one that I put first at this point of time. The price action in liquid, high-ticket stocks. Here is why.

$XLK (technology) is already up 19% YTD, $XLF (financials) is up 22%, $XLY (consumer discretionary) is up 15%. If you haven’t been at least 70% invested in U.S. equities, the odds are that you are underperforming. By mid March, many money managers realized that they were exactly in that precarious situation. As usual, there was only one cure for their ills – high-ticket stocks. Stocks like $AAPL $PCLN $GOOG $ISRG $CMG. Only they provided the needed liquidity to get meaningful quick exposure to equities. And they were bought.

Many of the mentioned names are extended for sure, but it is never wise to guess a top and jump in front of a freight train during a bull market. Irrationality (aka good mood and liquidity) often trumps the patience of even the most stubborn ones. Sometimes unnecessary sophistication leads to overthinking and underperformance as often being early means being wrong.

At this point, almost any institution owns some if not all of the above mentioned high-ticket stocks. They are my leading indicators. If I see any signs of churning (high volume and little price progress) or distribution (several negative big-range, high-volume days) in them, I will seriously reconsider my current view of the market.

Josh Brown is out with a thoughtful piece, covering the underlying reasons behind the recent underperformance of industrial metals ($KOL, $FCX, $X):

Really cyclical stocks always are most dangerous when they look the cheapest – because the smart money knows the earnings are peaking for the cycle (think homebuilders with PE multiples of 6 or 7 back in 2006)… Right now I think they’re in no-man’s-land and earnings revisions will be to the downside if China deteriorates even further.

Many of the industrial metal stocks look like a bargain for the naked eye and they have become popular bottom fishing targets. Sooner or later, everything should go up in a bull market, right? Well, this has never been the case. Unlike bear markets, bull markets are markets of stocks,where correlation is relatively low and stock picking matters.

Events are rarely discounted in advance due to their short-term nature. An event that provide new information could start, confirm or stop the discounting of a process.

The so called smart money has learned to discount cycles before they happen. For example, at the  beginning of a new bull market, cyclical stocks often look terribly “expensive” just before their earnings start to recover. Prices rise before fundamentals improve, resulting in extremely high P/E ratios. In this case, multiple expansion is a sign of improving perceptions and growing positive expectations, not a sign of dangerously high valuation.

If  Wall Street is always forward looking, how come it doesn’t take into account the fact that economic cycles are predictably repetitive and therefore should not matter in the big scheme of things. Well, the market is forward looking and short-sighted at the same time. It usually doesn’t discount  more than 6 to 12 months ahead. Uncertainty is too big beyond that. 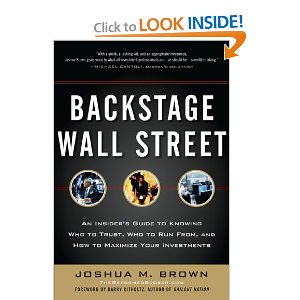 They say that marines do more before 9am than most people do all day. Josh Brown is one of those persevering pros who do more than the marines. His first book, Backstage Wall Street, is a well thought out mix of hard-earned personal experience from both the buy and sell side of the business, in-depth research and witty commentary on the side effects of greed and fear on Wall Street. Backstage Wall Steet is Liar’s Poker meets Kung Fu Panda. Without any hesitation, I would label it as a highly useful read for anyone that manages or intends to manage money.

Here are some of the insights I picked up from reading it:

1. Selling one’s expertise is much easier than actually developing an expertise, especially as it pertains to investing.

2. A good broker can close on anyone and he means anyone. Well almost. I was secretly hoping to adopt some of the successful selling techniques in my portfolio of bar pick up lines, but then Brown slapped me with the following: “It is nearly impossible to impulse-sell securities to women, as they tend to invest more for financial security than for bragging rights, big fish tales, or naked greed like wealthy men do.” If only stocks were shoes.

3. By driving the costs out of trading, the online brokerages had inadvertently driven the investment banks back to the profit drawing board—as history has shown time and again, Wall Street getting creative is almost never a good thing.

4. Social media is just one more disruptive force that allows talented individuals to build their own brands and to gnaw away at the once-mighty oaks that have ruled the industry for so long.

5. Wall Street Sell-side research is a giant joke. In bull markets, you don’t need them because everything goes up. In bear markets, their warning is usually way after the fact.

6. The game used to be played like this: “Do your initial public offering through our banking department, and our brokerage analysts will guarantee you a ‘strong buy’ rating for your first six months of trading.”

7. There is still an understanding that you don’t downgrade the big clients of the firm. When analysts do downgrade stocks, in my experience, it tends to come only after a slew of weak earnings reports and in the context of a stock price that has already been falling for months. In fact, ask most experienced traders about which type of sell-side call gets them most excited and they’ll almost unanimously answer that they love when a broker goes negative. The value investors will wholeheartedly agree.

8. The most effective method of selling anything in this world is through storytelling. And it is not just product that needs to be sold. Strategies have received their own stories as well. “Buy and hold” is one of the greatest stories ever told, this despite the fact that in the past century we’ve seen 25 cyclical bear markets and two bone-crushing secular bear markets.

9. There are a lot of “murderholes” on Wall Street: SPACs, Chinese ADRS, one-drug biotechs, private placements among others. I love the quote from Mike Tyson in the book: ““Everyone has a plan, ’til they get punched in the mouth.”

Source: Brown, Joshua M. (2012-02-29). Backstage Wall Street: An Insider’s Guide to Knowing Who to Trust, Who to Run From, and How to Maximize Your Investments. McGraw-Hill.