The first investment theme of 2012 might be already taking shape and it looks like it is the good, old reflation trade. I have noticed the relative strength in numerous energy names over the past two weeks. According to Joe Kunkle, today this action is confirmed in the options pits:

Crude oil is threatening to break out to new 6 month high, while the beaten up in 2011 cotton and sugar are showing some signs of life. Gold miners continue to recover. 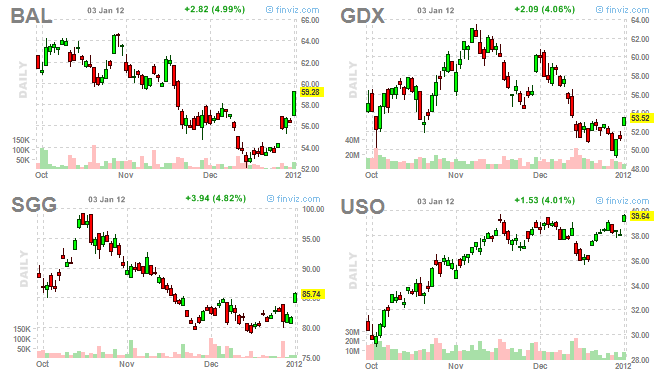 Meanwhile, we witnessed major reversal in inflation sensitive names in the restaurant industry: $BWLD, $MCD, $PNRA, $DPZ. One day does not make a trend, but it is certainly an interesting development to keep an eye on. 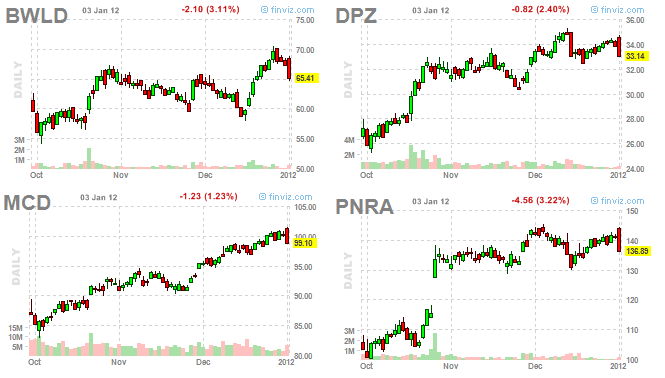 The reflation trade has been on and off consistently in each of the past 10 years. 2011 also had a period between February and April, when apparel and restaurant stocks suffered. The expectations for lower margins due to increasing input costs were short-lived and those stocks outperformed in the deflation labeled second part of the year.

The market tend to change its mind often and quickly, but occasionally there are periods of a few weeks to a few months, when it could stick to one theme and often over-discount it. Let’s see if reflation is among the first investment themes to take shape in 2012.