1. People usually expect the future to be like the past and underestimate the potential for change.

2. When everyone believes something is risky, their unwillingness to buy usually reduces its price to the point where it’s not risky at all. Broadly negative opinion can make it the least risky thing, since all optimism has been driven out of its price.

3. In investing, as in life, there are very few sure things. Values can evaporate, estimates can be wrong, circumstances can change and “sure things” can fail. However, there are two concepts we can hold to with confidence: • Rule number one: most things will prove to be cyclical. • Rule number two: some of the greatest opportunities for gain and loss come when other people forget rule number one.

4. Very early in my career, a veteran investor told me about the three stages of a bull market. Now I’ll share them with you. • The first, when a few forward-looking people begin to believe things will get better • The second, when most investors realize improvement is actually taking place • The third, when everyone concludes things will get better forever

5. Investors hold to their convictions as long as they can, but when the economic and psychological pressures become irresistible, they surrender and jump on the bandwagon.

6. Even when an excess does develop, it’s important to remember that “overpriced” is incredibly different from “going down tomorrow.” • Markets can be over- or underpriced and stay that way—or become more so—for years.

8. Our goal isn’t to find good assets, but good buys. Thus, it’s not what you buy; it’s what you pay for it.

10. One way to get to be right sometimes is to always be bullish or always be bearish; if you hold a fixed view long enough, you may be right sooner or later. And if you’re always an outlier, you’re likely to eventually be applauded for an extremely unconventional forecast that correctly foresaw what no one else did. But that doesn’t mean your forecasts are regularly of any value

11. Surprisingly good returns are often just the flip side of surprisingly bad returns. One year with a great return can overstate the manager’s skill and obscure the risk he or she took. Yet people are surprised when that great year is followed by a terrible year.

12. Psychological and technical factors can swamp fundamentals. In the long run, value creation and destruction are driven by fundamentals such as economic trends, companies’ earnings, demand for products and the skillfulness of managements. But in the short run, markets are highly responsive to investor psychology and the technical factors that influence the supply and demand for assets. In fact, I think confidence matters more than anything else in the short run. Anything can happen in this regard, with results that are both unpredictable and irrational. 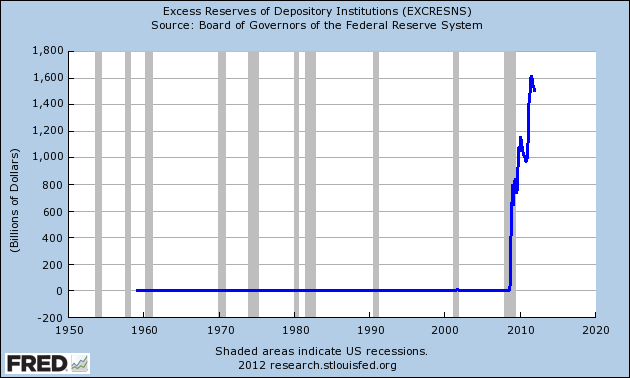 It is a public secret that Fed’s attempt to sustain interbanking lending during the last financial crisis has led to ginormous increase to gynormous increase in banks’  excess reserves (the a part of capital above the minimum required reserves that it is not loaned). At the beginning of 2007, the excess reserves in the U.S. financial system were $1.5 billion. Today, they stay at $1.5 trillion – a 1000-fold increase in 4 years.

Banks have three major options to allocate those excess reserves:

– buy short-term U.S. Treasuries and earn interest, which at this point is close to zero;

– lend it to the private sector at higher interest rates.

In normal circumstances, all banks would choose option number three, because it is the most lucrative for them. The thing is that the circumstances are not normal and there simply isn’t demand for this money at this point of time, so banks keep hoarding and earning the little percentage that the Fed and Treasuries pay them.

The exorbinant amount of excess reserves has many people worried that once demand for leverage from the private sector picks up, the final result will be accelerating inflation that the Fed won’t be able to stop. It turns out that one of Fed’s plans to fight this potential development is through raising the interest it pays for excess reserves in order to discourage banks from further lending. I am curious to see how this will work out.

Anyway, it looks like that the shortest way to rising profits for the banks is rising inflation expectations, which should encourage loan demand. Maybe this is one of the explanations behind the recent appreciation in U.S banks’ stocks. It is not only a result of short squeeze and “January effect”.

Todd Keister and James McAndrew from the NY Fed explain in details how everything works. I encourage you to read their paper from the summer of 2009 in its entirety in order to get better understanding of the mechanism of the U.S financial systems and the potential consequences for the future.

When the economy begins to recover, firms will have more profitable opportunities to invest, increasing their demands for bank loans. Consequently, banks will be presented with more lending opportunities that are profitable at the current level of interest rates. As banks lend more, new deposits will be created and the general level of economic activity will increase. Left unchecked, this growth in lending and economic activity may generate inflationary pressures. Under a traditional operating framework, where no interest is paid on reserves, the central bank must remove nearly all of the excess reserves from the banking system in order to arrest this process. Only by removing these excess reserves can the central bank limit banks’ willingness to lend to firms and households and cause short-term interest rates to rise.

This logic applies equally well when financial conditions are normal. A central bank may choose to maintain a high level of reserve balances in normal times because doing so offers some important advantages, particularly regarding the operation of the payments system. For example, when banks hold more reserves they tend to rely less on daylight credit from the central bank for payments purposes. They also tend to send payments earlier in the day, on average, which reduces the likelihood of a significant operational disruption or of gridlock in the payments system. To capture these benefits, a central bank may choose to create a high level of reserves as a part of its normal operations, again using the interest rate it pays on reserves to influence market interest rates.

Capital constantly moves from one sector to another, from one asset class to another. While your major attention should be focused on price action of the assets you own or trade, the ratios below help to look below the obvious surface and gauge the underlying market themes. You can tell a lot about capital markets’ confidence  and direction of money flow.

Small caps are more volatile as they are easier to move. They tend to outperform in periods of rising confidence and drastically underperform during corrections, when the bids for them simply disappear. 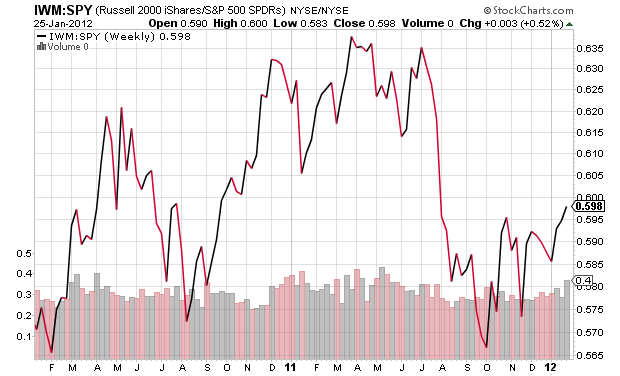 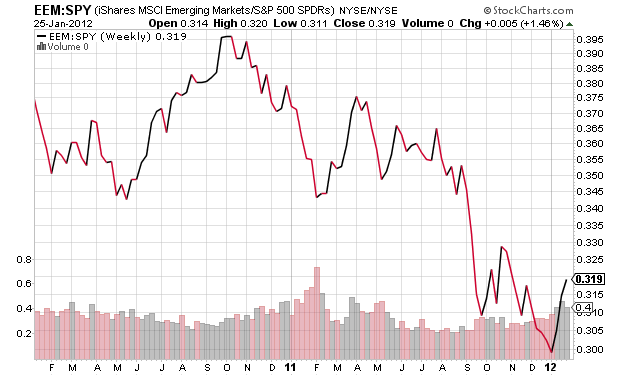 When the stock market is in a process of discounting potential economic slowdown, staples tend to outperform as money chases recession-proof, dividend paying companies like tobacco and healthcare, for example. Consumer discretionary stocks are cyclical plays and tend to outperform during periods of increased optimism. 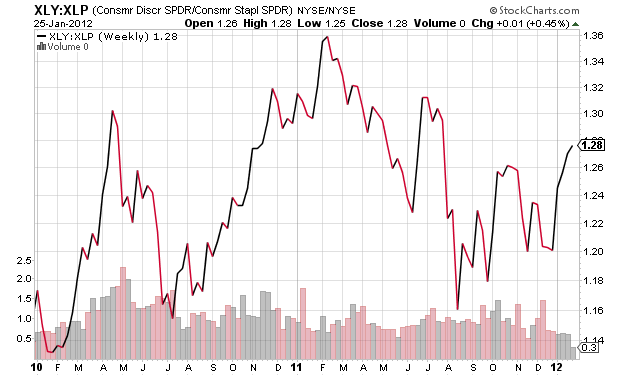 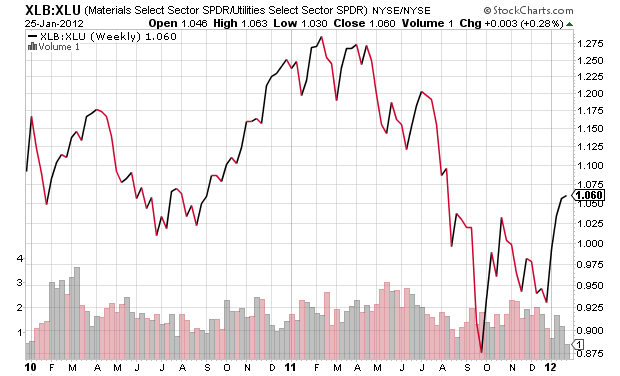 When the return of principle is more important that the return on investment, U.S. Treasuries are considered the ultimate safe haven and capital flows to perceived security. When money is chasing return and market mood is improving, capital tends to favor equities.

For example, curently the 5-year U.S. Treasury note yields less than 1%, the 30-year treasuries yield 3.15%. No hedge fund  could justify its fees or pension fund reach its annual target by investing in these vehicles. Once the fear of losing principle subsides and inflation expectations kick in, equities tend to outperform. 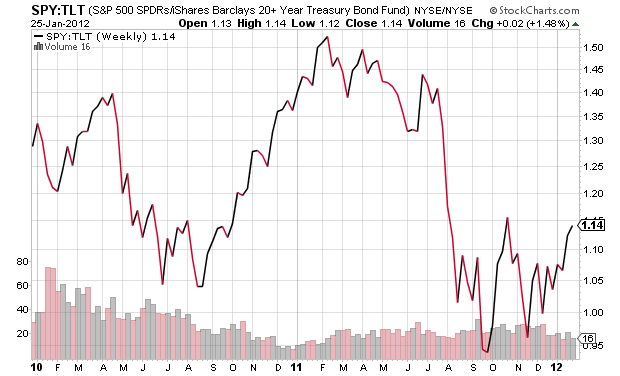