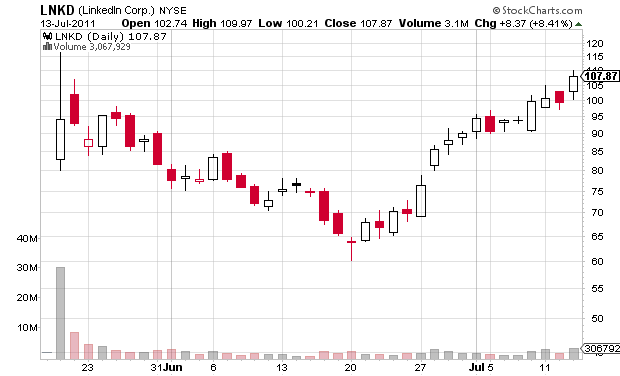 On the day $SPY gaped 1% and then lost almost the entire advance, $LNKD closed at new all-time high. The only day the stock traded above its current price was its IPO.

I have no idea what LNKD should be worth. Its critics don’t know either. They say that it should be worth less than it is now. All I know is that when an industry or sub-industry becomes a “concept investment”, large number of funds will allocate percentage of their capital towards it. Social media has become a separate investment concept and there are not many pure plays of publicly traded social media stocks. At this point I have no positions in $LNKD.

On a side note, Moody’s ($MCO) decided to attract some media attention and warned that the U.S. could lose its Aaa rating. At of the moment of writing, indexes are down about 0.5% on the news. Do downgrades matter? Yes, they do – a lot. Banks are not required to hold capital against debt rated AAA as it is labeled “risk-free”. A potential downgrade might find some banks under-capitalized. The economy can impact the market and the market can impact the economy too – the relation is systematic. Reflexivity in its full force.