Last decade belonged to caffeine stocks. Hanson Natural ($HANS) went up almost 16,000% for the past 10 years. Green Mountain Coffee Roasters ($GMCR) advanced 4,000% for the same period. The common element between the two companies was that they both offered new product targeting the end user and the only obstacle for growth was expanding their reach via new distribution channels. The common denominator of the underlying stocks was that they both reached an all-time high multiple times during their surge.

The market has been struggling as of late as apparently the debt ceiling negotiations are curbing risk appetite. Despite the general weakness, there are still names that keep rising.

Nutrition stores stocks continue to outperform. Two of them ($MJN and $GNC) closed at all-time highs today. Another ($VSI) is within striking distance from that benchmark price level, where all buyers are in a winning position. Neither of three companies is showing spectacular earnings or sales growth, but all continue to report above their analysts’ estimates. So far, the market has been reacting positively to the surprises.

$MJN beat the consensus earnings estimates by a small margin for 6th consecutive quarter and advanced to new high on 3 times its average daily volume. 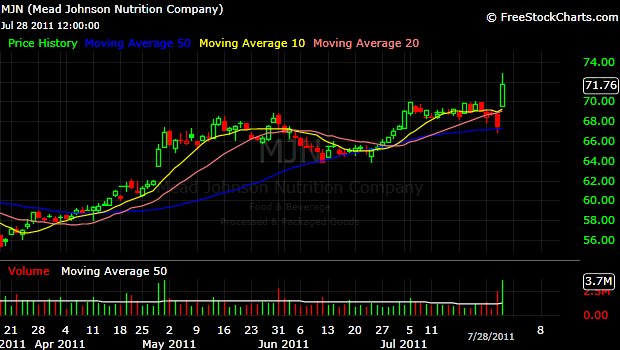 $GNC is up 45% since April 1st, when it had its IPO. The company just raised its FY11 earnings guidance and gaped to a new all-time high. 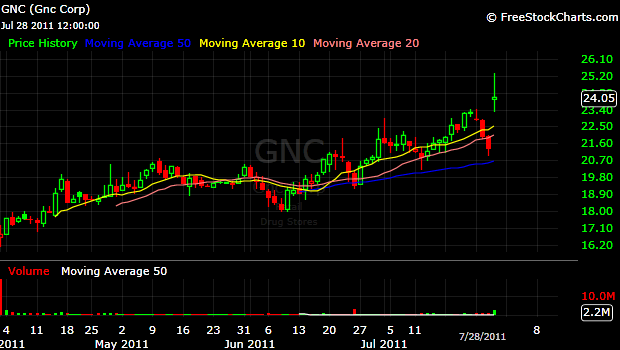 Vitamin Shop ($VSI) bounced 8% from its rising 50dma on a huge volume. It reported better than expected earnings in the afternoon. It will be interesting to see the market reaction tomorrow. 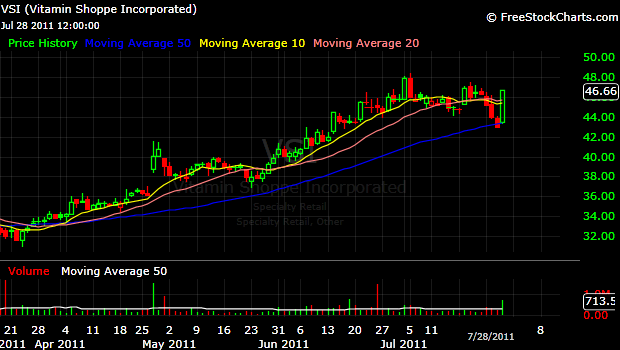 New technology is often associated with disruption that changes the status quo. Sometimes the change is lethal for established industries, other times it plays the role of resurrection.

Some can make the argument that Amazon is putting out of business brick and mortar retailers. Amazon is not the reason. The reason is in the stores themselves. Provide the experience and the sexy products that Apple offers and people will come. Amazon is merely the reason for cheaper commercial real estate, which hurts REITS and homebuilders, but also provides better rates for smart retailers.

In the meantime, new technology is actually saving old industries.

E-tailing and Amazon are saving the paper industry. Just when we thought that paper has become a thing of the distant past, people adopted new habits of buying online and the demand for packaging paper skyrocketed. E-tailling is helping the distribution and logistics business too, but this was expected.

Netflix, Hulu, Amazon Video Store, Apple and Google TV are saving the video content providers. Look at the charts of $CBS and $DIS. There has always been a demand for great content. The new media, the new technology has just offered an alternative way to consume it.

It is said that the best companies build their own industries. $AAPL and $AMZN are two typical examples. Both went from zeros to heroes in 12 short years, disrupting everything and everyone. Both are trading at new all-time highs after blowing off the estimates in their most recent earnings reports. Often there is a difference between a great company and a great stock. $AAPL and $AMZN have been the exception, so far.

Other than the usual suspects $AAPL and $BIDU (which just crushed earnings estimates again), the all-time high list is populated with some interesting names.

The Swiss cows have become 30% more expensive than the American cows over the past 2 years. There are rumors that the Swiss marmots want to retire and receive their pensions in the U.S. 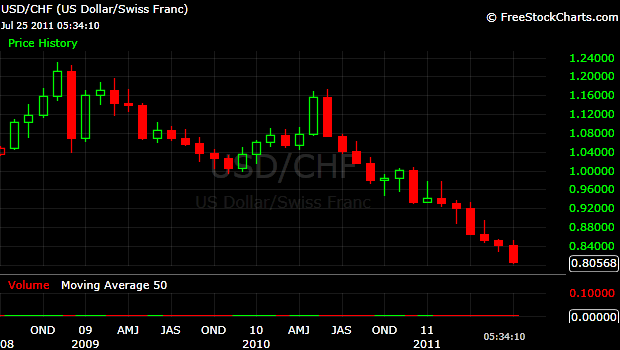 $GLD keeps surging as debt ceiling talks in U.S. have turned into a soap opera. Sometimes pictures are stronger than words. See a quarterly chart of $GLD since its inception. 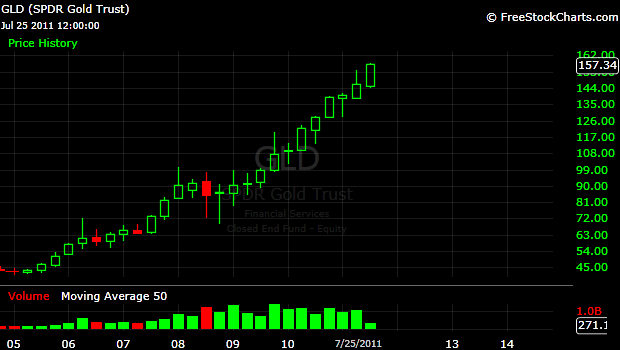 $RGR is not technically at all-time high, but 15-year high has similar meaning from psychological perspective. 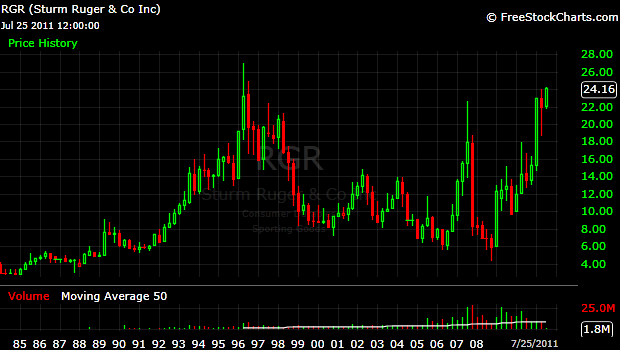 With guns, gold and the Swiss Franc at record levels, the market doesn’t really provide a vote of confidence in the world economy. Thankfully, the stock market and the economy can go in separate directions for an extended period of time and renting stocks is not illegal.