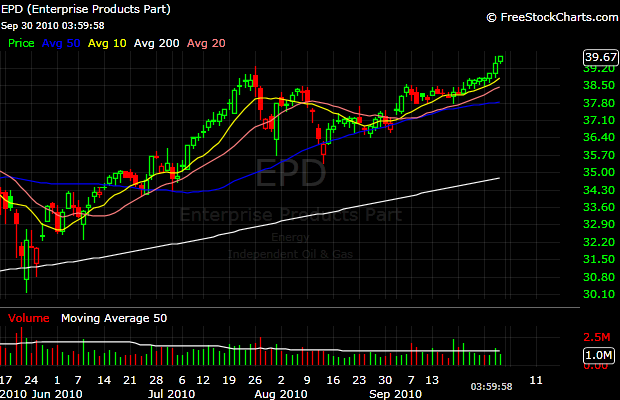 Independent oil and gas related stocks missed the bigger part of the September’s rally. There has been a clear revival in the industry over the past week as the near month crude oil futures broke out above their 50 day SMA. $EPD was listed under number 46 in the last edition of StockTwits 50. The stock spend the better part of September, consolidating above its rising 20 day SMA.

Enterprise Products Part, Inc beat its analysts’ consensus estimates for last three quarters. Three weeks before their last earnings report on July 26th, the stock started to move. It appreciated 13% in expectation of another positive announcement. The stock recently broke out to a new all time high and it seems like the pattern from last quarter will be repeated. The next earnings report is scheduled for October 26th, BMO. 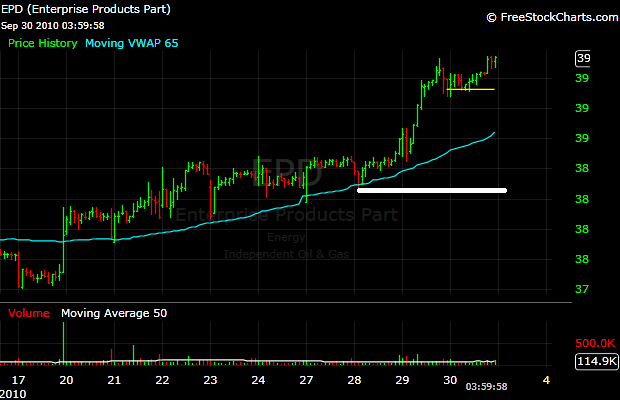 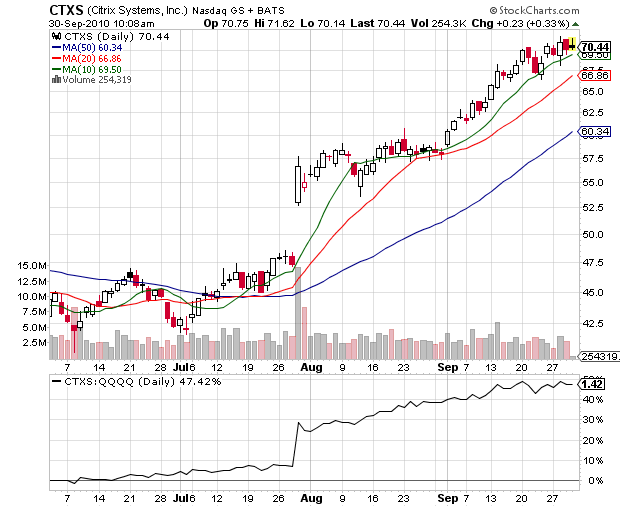 $CTXS was one of the featured stocks in the last edition of StockTwits 50. Since its earnings breakout on July 29th, the stock has been holding above its rising 20 day SMA. On Sep 1st, $CTXS accelerated its pace of price appreciation and started to obey its rising 10 day SMA.  The next earnings report is scheduled for October 21st, AH.

Citrix Systems, Inc has a long history on beating its analysts’ consensus estimates by a small margin and then guiding conservatively.  After series of consecutive earnings surprises, the market tends to catch up and tries to discount a potential future surprise in advance. If the general market continues to cooperate, there is a high probability that $CTXS will try to rally before its Q4 report.

I would be a buyer on a pullback to its 20 day MA. An exit signal will be given when the following conditions are met:

– the low of that day is violated. 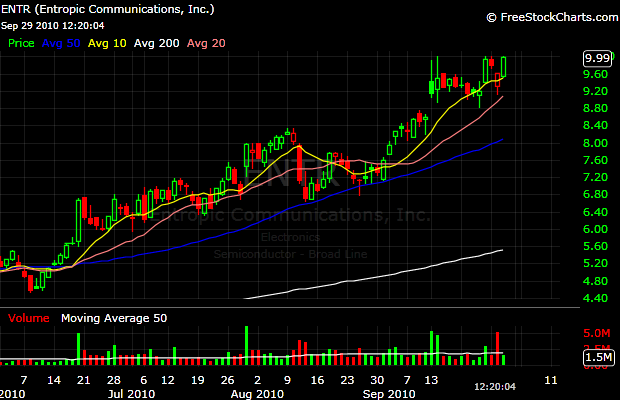 $ENTR was one of the featured stocks in the last edition of StockTwits 50. On Tuesday, the stock gapped down on report that the company will make a secondary offering of 10 mill shares, which represents about 13% of its current float. Buyers took advantage of the dip and stepped in right above the rising 20 day SMA – a clear sign of institutional support.

The market quickly shook off the news and it sent the shares of Entropic communications Inc to new all time highs. I opened a pilot position at $9.99 with a stop at Tuesday’s lows at $9.10